How to erase your mistakes 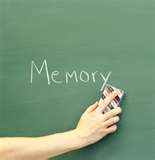 So for Father's Day I thought it would be a fabulous idea to make D some sort of video or photo montage set to music. He's made me so many I figured he should have one. I looked though my applications and saw that I had iMovie and iDVD, both perfect (I heard) for this type of project. After days and days of carefully selecting and dropping pictures into the appropriate drop slots, I ended up with nothing but cheese. It totally sucked because the one person I knew could do this in a second was D!

Then I figured out that it was actually easy to do in iPhoto. After selecting my photos and music I had created a masterpiece! I cried every time I watched it so I knew it was good. During the making of my epic piece I noticed that my computer was lagging. It was super slow and that stupid spinny rainbow made an appearance all too often. Of course I couldn't tell D, I had too much evidence on my laptop. I would have to wait until after he saw the video. I didn't want him snooping around and yelling at me for having too many giant photos in different places.

After K and I presented our gifts I gently told my IT hero what was going on. He checked it out and told me that my pictures were too big and I needed to make some space. I was only left with 2 gbs. He had some pocket drive for me (like I know what that is), I asked him if the trash in my iPhoto was slowing it down, of course it was, I never empty it. I said I could probably delete a lot of the pictures anyway since I usually take hundreds at a time. Besides I still had pictures of the ex-emotional vampires and shape shifters. I felt the need to wipe them off my hard drive, just as I had wiped them from my memory.

It felt great! I spent over an hour hitting the delete button, if there was a picture that I liked I just used my handy crop tool and voilà, they were gone. If only it had been that easy to do in real life. Banning all negative energy from my memories (actual and computer) was quite relaxing and the end result was amazing. My computer was suddenly quicker. I suppose bad energy can have an effect on anything.

Is it possible that I had made a mistake? No way, all those memories were based on lies, and they now sit where they belong. In the abyss.

The best part of all this? I haven't seen the stupid spinny rainbow in a while.

I really hate that thing!
Posted by MicheleB at 12:20 PM