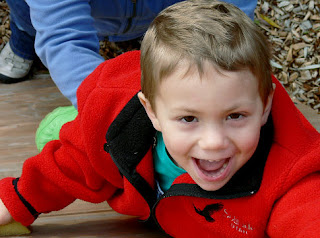 I was sad to hear this news earlier. Liam's story is a true tale of bravery, love and devotion. His parents are amazing people and will continue to honor their son by devoting their time to their charity, Cookies For Kids Cancer, which they set up after learning the devastating news of Liam's diagnosis when he was only 2.

The following article was taken from the New York Daily News:

Liam Witt, 6, inspired others in his cancer battle by providing a 'Bravest' example
By Joanna Molloy


When Liam Witt was diagnosed with Stage 4 cancer at 33 months of age, his parents began calling him Prince Liam the Brave. After they moved Liam and his little sister Ella from New Jersey to New York to be closer to Memorial Sloan-Kettering Cancer Center, firefighters down the block saw a kindred spirit.

The men of Ladder Co. 24 and Engine Co. 1 made Liam an official firefighter and even gave him an equipped locker inside their firehouse on W. 31st St. As Liam underwent surgeries and was treated with chemotherapy and radiation for four years, his irrepressible spirit inspired friends to help his parents, Gretchen and Larry, start the foundation Cookies for Kids' Cancer.

It has raised an astonishing $2.5 million for pediatric cancer research, mostly from small bake sales and the charity's online cookie orders. "He never became 'that sick kid,'" said Fraya Berg, a family friend. "He never lost himself in the disease. He was just a kid who was sick." "He loved riding his beloved orange scooter through the streets of New York, even after a day of treatments at the hospital," added another friend. "He loved to bake cakes so he could decorate them. He loved Valentine's Day because he always loved telling people he loved them. He did that every day."

His parents tried to make a game out of the many hospital procedures he would undergo to treat his neuroblastoma, a cancer that attacks nerve cells. They would play pretend. "If he was getting an MRI, it was 'getting his picture taken,'" added Berg. Needles for blood tests were like car engine checks for oil.

The Witts kept an online diary, PrinceLiamtheBrave.blogspot.com. On Aug. 26, Larry Witt wrote: "Liam continues to accept whatever comes at him each and every day. ... I hear more complaining from adults about the weather, their jobs, their co-workers, family members and acquaintances in the course of a week than I have heard from Liam in four full years."

Liam took a turn for the worse, and he was unable to attend a concert given by Jack Johnson, whose music he loved - especially the song "Talk of the Town" with its images of the sun and the beach, and the line "the clouds give back every time they cry." Johnson made a special video of the tune just for Liam to help him fall asleep.

Two weeks ago, little Liam lost his battle, dying peacefully in his parents' arms. He was 6 years old.

"Our dearest Prince could simply fight no more," his parents wrote. "His enemy had grown in size and strength."

So has Liam's army. On Valentine's Day, Liam will get a firefighter's honors at his memorial service at St. Francis of Assisi Church across from the fire station where his little helmet and coat proudly hung yesterday.

"Every guy in the firehouse will be there," said union rep Matt Parrott. "The guys who will be off duty are coming in. We'll all be wearing our [dress] uniforms and we're going to line up and salute."

Actress Joan Cusack has volunteered to be spokeswoman for Cookies for Kids' Cancer.

The Witts are more determined than ever to raise money for the appallingly underfunded field of pediatric cancer research - the National Cancer Institute gives just 4% of its grants to children's cancer research.

You wonder where the Witts find their strength. And then you read another journal entry posted by Liam's father.

"Liam's almost daily display of bravery, strength and perseverance is really unbelievable when you think about the fact that he is just a 6-year-old little boy. He continues to inspire us."