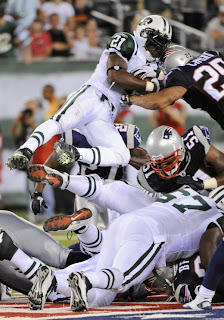 In a normal family that probably means Monopoly, Scrabble or even Uno. In my family it only means one thing: Football. D and I are ridiculous fanatics who are loyal to opposing teams. In fact our wedding vows include a few lines about our passion for the sport. When we had K all our friends were eager to see which team she was going to follow. Tradition was on my side, I'm a born and bred New York Jet's fan who spent Sundays watching my dad curse at the television while the Jets lost week after week, D chose to follow the New England Patriots as a kid after seeing Pat Patriot, their revolutionary minuteman logo. Either way a fan is a fan and I admired his loyalty following a team that wasn't just a cool team to watch. Then they won the Superbowl and it became annoying, then rivalry was back.

When K was three we decided it was unfair to make her pick a side and confusing for her to like both teams. I had received a sheet with all the team logo stickers and we let her choose (we took off the Miami Dolphins sticker because those fans were not allowed in our house). After careful deliberation she decided she was going to be a Detroit Lion's fan. Historically it made sense, she would learn the ropes of fanhood by following a team that truly sucked just like her parents. So for the next few years she watched her team lose with a disappointment that D and I knew well. Every year at the start of preseason she would ask if her team was going to stink, every year we told her yes. Still she happily cheered on her losing team making D and I supremely proud of our dedicated daughter.

This year D surprised her with an official Calvin Johnson jersey which she wore proudly (along with her hat and giant foam finger) on opening day. Even D and I got into the Detroit action as we both cheered and hoped for a Lion win. When a terrible call was made we yelled and screamed at the television, at one point I turned to D and said "honestly, did you ever think we'd be yelling about the Lion's?" It was a funny moment in the B household.

Back to D and I, twice a year, every year the Jets and Pats play each other. These games have traditionally hard to watch for me since the Jets always lose, not just lose but lose bad. It was OK because we were usually alone watching these games. We would always have a big kick-off party the first weekend of the season, one year we decided to have the party a week later for the Jet/Pat game (part was laziness and part was brilliant strategy) and suddenly the B Bowl was created. Friends couldn't wait to come over and watch us yell at each other, while it was all done in fun I think a few of our friends hoped for a brawl. I liked the tradition of having a house full of football fans watching us watch the game. The comments and jokes made it seem like we living in our own sitcom. I was always on the side that received the consoling pat on the back while D got the high fives. Then last year the unthinkable happened, in house full of friends the Jets won. Suddenly I was the one getting high fives while D got the "sorry bro" pat on the back. Now I'm not saying the Jets always lost these divisional games but it had never happened in my house with witnesses.

This years game looked like it was going to be a good one, the Jets were no longer the divisional jokes but an actual threat to the Patriots. We filled our house with football fans because neither one of us had the time to be gracious hosts, we didn't care who our friends cheered for as long as they knew that this was a serious moment in our house (not that we didn't have fun). Another tradition for this event was K's wardrobe, she was always dressed head to toe in the team that had home field advantage. Since becoming a Lion's fan she had the choice of attire. She usually obliged her insane parents by wearing the home team uniform. This year she was all Lions and greeted our guests in full Lions garb including face and hair paint. No one batted an eye, after knowing us so long it was inevitable that the fanatic gene would kick in. Friends now gave K consoling pats on the back about her beloved Lions and she took it like a B. We were so proud.

As the game went on people came and left but for the most part they all sat in our living room watching the game, now that K had her own team and her game was over she didn't want to waste the afternoon watching another game and went swimming with the son of a non-football fanatic, our friends L and D's kid J. L and D were gracious enough to watch the kids since neither D or I were able to. I won't go on with the specifics of the game (I know that D reads this and I don't want him to go through the heartache again), but the Jets won after coming back from a lousy first half. Our house was full and loud, non-fans always get in the action because it's easy to make fun of us. We don't trash talk or take it personally, we make comments here and there but it's not serious. At the end of the game the winner gives the lose a hug (which is always a win) and we make our predictions for the rest of the season.

I had a great time today, not only because of the "w" in my column, which is always a good thing, but because we've created a tradition. One that we all love. Within minutes after the game ended our phone were ringing, texts were flying and Facebook pages were filled with messages. My house was full of new friends, old friends and friends that we haven't seen in years. People that don't really know each other but get along like a big happy family. Which in reality is what that is for us. Family.

Some people love the holidays because it brings them together and that's cool. D, K and I have found our own way to bring everyone together in a way that's unique to us. We've created our own universal holiday and no one is excluded.

Well, except Dolphin fans.
Posted by MicheleB at 9:24 PM