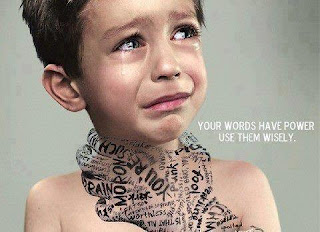 A friend of mine posted a disturbing thing on Facebook this morning. Her ten year old son was being teased at school and it was upsetting him. How could it not? This bullying story was particularly disgusting because it wasn't a student doing the teasing, it was a coach. I have no doubt that she will make sure this stops, the problem is that it was even an issue in the first place.

Schools all over the country have policies on bullying, they have "No Name Calling Week," they make new students sign a No Bullying Pact and they insist that actions will be taken. Are they? I know K has had issues, with very little "action" from the school. When it comes to this issue it's generally all talk. This seems to be everywhere. The schools do not want to get involved, the teachers do not have the time and the parents couldn't be bothered. "They'll work it out" is usually what I hear. That might be the case sometimes but what happens when the bully is the one in charge?

Last year there was an incident that involved K. All the girls were sent to the office to "discuss" it with the principal. K was barely involved but went in anyway. The principal told her that she needs to be a leader, not a follower (I agree) and that she should always stand up for herself and her friends (agree there as well). She then proceeded to tell my daughter that if she ended up in the office again her work permit (what she needs signed by the school to work) will not be signed. WHAT? The way to discuss bullying is to BULLY? I think I wrote about this before, I'm still kind of shocked it happened and this was last year.

My friends post brought it back. Then after pick up today K tells me that her teacher yelled at her and a friend after they misunderstood directions on a project. As they tried to explain the teacher grabbed their pencils, from them, had a huge screaming fit then threw the pencils back at them. Thankfully I was at home when I heard this. Actually, the way K told the story it wasn't as bad. It was later when I received an email from the other girl's mom (a very quiet and mellow girl) with the full details that I really got upset. Apparently this left both girls in tears and the teacher said "Don't look at me like that!" when they looked up at her. The other mom and I will be taking care of this matter immediately.

Edited to add: I calmed her down and she went off to school but it took a lot of coaxing. I'm not sure what the teacher will say, there is not one situation where this type of behavior is acceptable. Not one. Look, I know my child is not perfect. She can be chatty and tends to lose focus at times, but a simple "Please pay attention" or "No talking" is more than enough. If the teacher wants to use authority to get her message across then by all means use a firm tone. Yelling and throwing are not the way to teach kids, it's a way to scare them. I've taught my daughter to use her words and never throw things, it is not an effective way to communicate.

(Reading this now, the next morning has me in tears. The thought of my little girl sitting in her classroom crying breaks my heart. I want to run to the school and sign her out just to hold her.)

I know that sometimes I say things when I'm upset, they don't mean anything, they just come out. Unfortunately once they are out they can't be erased. Seeing this picture is heartbreaking and it's in my head now. It will serve as a reminder of the real damage that can be caused by speaking and acting without thinking.

I hope I can muster the strength to think before discussing the incident at school.