We will never be loyal 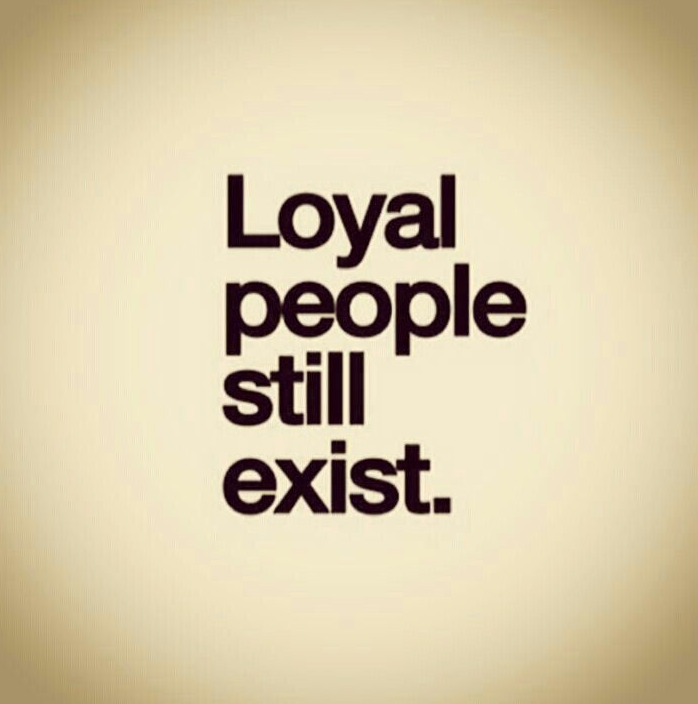 I hope that the image above is true, unfortunately I tend to run into the type that inspired the title of this blog.

It's sad because I am extremely loyal, I used to see it as a badge of honor but lately it feels more like a character flaw. I try to surround myself with others that are like me: Flawed, authentic, trustworthy and loyal. I don't want my friends to be perfect, just real. It's an ongoing theme of each chapter in the story of  my life. Like any story we must say goodbye to certain people. Some chapters you don't even see it coming, like a George R. R. Martin novel without all the blood.

When I first started writing this I had friends that I thought were true blue. Sure there were some odd traits but that never bothered me. Of course looking back I can see they weren't quirks, they were huge red flags waving with such velocity they were causing tornadoes (which I failed to see as well.) OK, lesson learned and I came out of it a little wiser with a few less names on my holiday card list.

I proceeded with life, moved on, made new friends and forgot the betrayal that somehow didn't sting anymore. Time buries all wounds right? I chose wisely, carefully distinguished between quirky faults and psychotic clues. It's hard when you really just want to trust someone but you know that one day, that other shoe might just drop. Luckily nothing really terrible happened. No huge betrayal, some friends came in and out of our lives which is normal, especially when you live in an urban sprawl.

I fell into a pattern, happy with those around me, always available with a shoulder to cry on, an ear to hear complaints and a hand to hold when hand holding was necessary. I always seemed to be the one people called when they needed to vent, that was fine with me, it's a role I am used to and actually good at it. Then I started noticing a different pattern. With some friends, and if this blog was a podcast the friends would sounds like  f r i e n d s , the relationship became very one sided. I only heard from them when they needed something. Still, it was better than before so I accepted it. Rookie mistake. I regrouped again and tightened my circle.

My MO has always been to listen, pay careful attention, don't say much but hear everything. Sometimes that can be taken for naivete when it is in fact the complete opposite. I am acutely aware of everything, sometimes to a fault. It's my superpower. I often predict situations that seem to come out of nowhere to the unsuspecting victim. Obvious to anyone who listens of course.

Recently I was put in a situation where I felt it necessary to stick up for a friend who had become a f r i e n d.  That sort of loyalty was appreciated and for a while we were back to being friends. Then I noticed that we were only friends when I was steering the friendship (see what I did there?) When this person had the chance to show their loyalty they didn't even try. I think when a person tries to show their true color, let them. Will I continue to be loyal? Of course. I don't want to stop being who I am because it sometimes leads to frustration.

When loyalty and trust are returned it feels wonderful, like you're the queen of the castle.