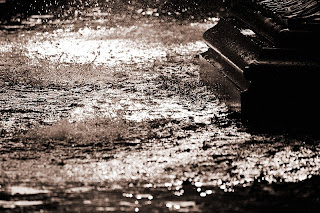 Growing up in New York we had rain all the time, it was no big deal, just a part of every day life. If it was really bad we'd don our slickers and rain boots, carefully applied over plastic bags (I'm not sure this was a universal practice or just on my house). We'd get to school with no problem and no one every complained. Here in Los Angeles, the rain turns into an event. Things get canceled, roads get shut down and the general IQ of the City of Angels lowers significantly. It's just water, I don't get all the drama.

We went to Dr. Phil today and traffic was awful, I had to get off the freeway because it wasn't moving. Luckily I am the Queen of Sidestreets (among many other titles) and made it with time to spare. I'm not really in the mood to discuss the session, I'll just stick with the weather for now. On the way home the sky opened up and the rain came down like I've never seen here in Los Angeles. My usual route takes me from the 10 West to PCH and on nice days traffic crawls due to beach goers and amateur shutterbugs, today ride just sucked. Not only do the roads flood easily making the middle lane the only one available for navigation but there are actual idiots that think it's fun to ride through the "ponds" that have been created.

I made it home and stayed there until I had to pick up K from school. Not because I don't know how to drive in the rain or that I'm afraid of it, it's everyone else out there. Everyone says that Los Angeles drivers are some of the worst out there, while I agree with that I am perplexed by the fact that like 80 percent of my friends and neighbors came here from somewhere else. They say that Los Angeles attracts the most beautiful people, so does that mean that the bad driving gene is attached to the beauty one? I'm not saying that all pretty people are bad drivers, I'm just trying to figure out some sort of correlation.

By the time I got to school the worst of the rain had stopped. Moms were dressed in the finest rain gear discussing the horrible ordeals they all suffered earlier. I waited outside raingearless talking to the crossing guard while my hair frizzed to monumental levels.

I like how it feels. I like how it smells. I especially like how it clears the air. After a rain, the view around Los Angeles can be magical. When I first moved here I ended up in the concrete Park LaBrea it felt safe for me, coming from New York. I had a gatekeeper and a patio. How cool. One day after being here about six months, it rained. It rained a lot. I was happy, I missed actual weather, my friends were turned into complaining babies and I got my first view of "STORM WATCH!" A strange news event that happens the minute the rain reaches the ground. The next day I marveled at how clean everything looked, the usual smell (a mix of car exhaust and fast food) was gone but the coolest thing? There were mountains to the East. How strange that I never noticed before. I was told that the rain washes away the smog. Ewww. I can only imagine what kind of crap we're breathing in around here.

Anyway. I think the point of this was to say that it's just rain, it's here to do good, why does it have to be an annoyance? I would think the people of this fine city would be happy to find a cleaner looking (and smelling) city. That's never the case. Is it because more work is necessary? More attention is required? Who knows. I just think people need to complain.

As for me, I'm just happy that my car doesn't look as dirty.
Posted by MicheleB at 12:12 PM