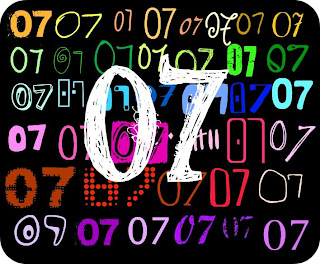 So K turned 7 today. She woke up early today full of excitement, wonder and a little anger because she didn't feel or look "very 7" she felt "kinda 6 still." I told her not to be in such a hurry to get older and she said she just wanted to feel older. I get that. I've been waiting to feel older for decades, it never really kicked in. I sent her off to school in a pretty pink dress, black Uggs and a smile over a mile long. She is truly a happy girl and to me, that's the best and only present necessary.

Last week was her party. A small affair for about 70 adults and kids (no, I'm not kidding). She wanted a karate party and we obliged, mostly because it would be easier for us to have everything inside one room and most of the work done by her sensei (poor guy!). I had no idea what to expect and I was completely blown away. Not only were the kids given a wonderful fun-filled lesson they were also treated to an incredible demonstration by an amazing group of black belts. Even K did a demonstration, of course at the time she didn't know this but she was actually testing for her blue belt. After the "cake ceremony" (which was an earsplitting round of the birthday song followed by a giant samurai sword cutting the cake) K was presented with her blue belt and a pair of blue nunchuks. While it must have been overwhelming at the time, I could see the look of accomplishment on her little doughnut-cake covered face.

Watching all of this through the eyes of my camera lens gave it a surreal feeling for me. I didn't grow up the way she will. I wasn't surrounded by the kind of love and attention that she has. I didn't know that feeling of accomplishment as a child. Hell, I didn't even know it as an adult. Watching K grow up into an amazing person has finally given that to me. Seeing my daughter owning it at seven makes me proud of us both.

While I watched K through my Canon I realized that she is not me, she will never be me and she will never have to suffer like me. That's not to say that her whole life will be peachy, I'm sure she will have her own issues but she won't have her childhood come to a crashing halt at seven. I'm not blaming this on being a child of divorce, although that was most likely the catalyst it wasn't the cause of my unhappiness. I'm not going to psychoanalyze my childhood, I've certainly done that enough around here. I'm simply going to state a fact about me and my revelations regarding parenting a child (parenting a parent is a whole other story). I put K's needs before mine. I do it all the time. In fact I tend to ignore my own needs to make sure hers are met. Not taking care of myself is a problem in itself and I am working on that. I am learning that it is possible to find a balance and meets the needs of my family at the same time.

What happened to me was the opposite. The needs of the child were not met at all. Leaving a child to physically and emotionally fend for themselves will yield catastrophic results. Of course the reverse isn't too good for the kid either, but I would have gladly taken "I am the center of the universe" over "I am not worth it." K knows that she is the center of my world, she knows that other planets exist in our family solar system. We all understand there's a lot of planetary activity in our daily trek around the sun, happily we also know that it isn't just a black hole of nothingness.

Today my baby turns an age that I've been dreading for years. When she announced her disappointment at not feeling any older I just laughed. When she looks back at her childhood she's not going have a feeling of dread. She's going to have a melange of happy memories, she might even remember some bad things, that's just the way life is sometimes. When she's older she will relive the start of her seventh year and remember getting her blue belt, having a ton of friends around her, having her cake cut with a sword by her favorite sensei and having her parents undying love and affection whenever she needed it (and sometimes even when she didn't).

Who knows, maybe I can stop fixating on all the things that happened to me when I was seven.

Wouldn't that be lucky?

Happy Birthday to my darling K,
I love you more than words can say!