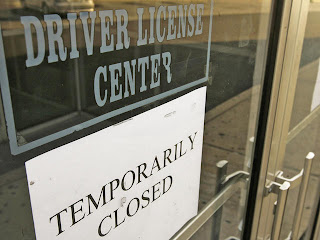 A while ago mandatory furlough days were instituted in California. All courts and Government offices were closed on that day, I'm pretty sure it was the third Wednesday of the month. I took advantage of this by scheduling my jury duty for one of those weeks. I still got called in. The mid week closure must mess things up, I got called in on the Thursday and sat there all day until I was released and thanked for my services. Good thing because while D was able to take K for that afternoon it's not something he can do on a regular basis. I was annoyed that caregiver for a 5 year old wasn't enough to get me out of it but that's a super long rant for another day.

I actually had a good time that day, except the getting there early part. That sucked. The rest of it was easy. I sat a table and read a book, got a quick lunch and then back to reading. Aside from the not to comfy chairs it was pretty relaxing. I don't think I've had a day like that since. Until today. D decided it was a mandatory domestic furlough day and made a plan that would keep her out of the house from 9:00AM to about 8:00PM. Part of this furlough day is to make up for last year's lack of D and K time and part of it was D's desire to spend time with his awesome daughter. Last summer we were going through a lot and I sometimes took my anger out on my daughter making some days difficult for all of us. That is not the case this summer. While things aren't peachy perfect they are getting better and the days while long are mostly happy. In fact there's a long list of things that are being neglected because of it, this blog is one of them. I've tried to catch up but it's impossible. My days are spent with my child and my evenings with my husband, or my Facebook friends :) I feel the backlog is impossible deal with so I put it off hoping to get to it. My case of Scarlett O'Haraitis has come back with a wicked case.

It's not like I don't know what I want to write. I have outlines and notes about what we did all over the place, I still get to my laptop and just stare. Mind numb, fingers still. The task of recreating the last few weeks is quite daunting, especially when the days are chock full of cool events. Like photo shoots, confidential commercials and an A-list party for a six yer old. I want to tell you these things, they were all awesome but at the end of the day I lay in a comatose-like state unable to do more than lift my latte and say how much my feet hurt.

Today was going to be different. With D and K out the door I was going to write, write write!! Right. Just as soon as I return a shirt that I bought at TJ Maxx, it looked cute at the store, not so much in my house. I also needed to find a white shirt for K, she has a photo shoot with another awesome photographer who is doing a series of kids in white. Luckily it's school uniform time and Old Navy is cheap. After that I was tired, returns at TJ Maxx are popular, I was there forever.

I came home and was determined to write. I just needed some lunch first. Hmmmmmm, can't write and eat so I checked the DVR to see what I had there. As luck would have it my guiltiest of all guilty pleasure was right there for me. It's almost embarrassing to say since I pride myself on the lack of television viewing that goes on in my house. Since I also pride myself on honesty I will tell you that it was The Real Housewives Of New Jersey. For reals. I don't know why I like it, it's truly awful, the women look like drag queens and they are ridiculous but still I can't look away. Just like that show on hoarders, it's gross yet I have to watch.

So I got sucked into that for a while and it felt good. It felt good to sit and let my body relax. I was completely absorbed in the absurdity of these big-haired drama queens. Then the guilt kicked in. The thought of telling D that I did nothing with my day off was bad enough, telling him I watched trash television was worse. I put on some music and started cleaning up around here. My writing wasn't the only thing neglected in my house, this place was a mess. By the time I got to K's room I was in full nesting mode. That might have been due to my period, sorry TMI? To make it worse it was a period I had been waiting for and I hate to wait. Especially four weeks. More TMI, so sorry.

I think I did a good job with K's room, not a huge change but she will be happy. I moved the bins of clothing out of her room into mine forcing me to finally once and for all finish the Great Purge of 2010. K's in camp again next week so I will have a few hours each day to methodically put my plan into action and complete it. Really. I mean it this time!!

So I know that there is a big chunk of this blog missing. I promise to fill in the holes when I have time. It's good stuff too.

D and K are almost home, I know they had a great day, I'm happy that they enjoy doing things together but I have to say I miss her. Driving around without my little buddy is no fun. I know she missed me too, she was so cute on the phone a few minutes ago. These furlough days are great, daddy and kid bonding is always good, relaxing time for mom is always needed but it's appreciating the ones we may take for granted sometimes that makes it all worthwhile. That's priceless.

I wonder if that's what they feel after a furlough day in the courts?