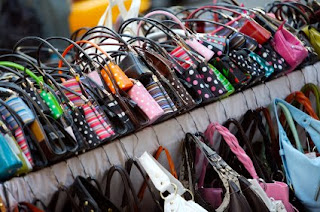 So it was a better day at camp pick up today, the girl that was mean to K was not there and she happily played with all the girls and even showed them how to do a high jump. Apparently it's K's special trick and all the girls want to learn it. I retrieved a happy camper today and we went to get a small treat on the way home. We ended up at Champagne Bakery for a latte and pink lemonade. I'm pretty sure we ended up there because it's next to Marshalls and we haven't been there in a while.

While we casually strolled around the store I reminded K that she was not getting anything. I'm in the middle of getting rid of a ton of her old stuff, there is no way this girl needs another thing! We walked the aisles and she showed me all the shoes I should buy. I'm not sure what to think of her selections, they are really suited for me unless I decide to become a pole dancer. She like shiny glittery high heels. I'm beginning to worry, I'd be really freaked out if she wanted them for herself. Anyway, I placated her and tried on a pair of awful hooker heels she thought were just beautiful. When I showed her a pair of gorgeous Marc Jacob boots for her she said they were tacky, clearly I have some work to do.

She stopped at the Ugg looking boots. Last year we relented and bought a real pair for her, she never really asks for anything like that and she has been working since she was a baby, we figured she could have a pair. She had insisted we use her money but that wasn't going to happen. She loved those Uggs and would wear them today if they didn't stink. Seriously, if you wear Uggs without socks the smell is terrible. Once K was changing into her karate gear in my car and gagged on the smell of her own feet! I can't even be in the car if she takes them off, it's nasty.

OK, that was gross. So today we're in Marshalls and she sees a pair of fake black tall Uggs, she finds a pair in her size and then tries them on. I just stand and watch waiting for the master debate that is about to start. First I take a look at these boots. They were actually made well and were super soft inside. K's opening argument were all about fit, they felt great! They were so comfy and would keep her feet warm in the winter. Then she moved onto the color, I wanted her to get the tall black boots last year but she went the style her friends had. If she got the black boots this time she can wear then with anything and when they dirty it won't be bad. I informed her that they were not the real boots and they won't be the ones her friends will probably have. She asked how much they were ($24) and how much the real ones were ($140) she then told me that she'd rather have the fake ones, even if she didn't get them today. She might as well have said "the defense rests." We walked out of the store with the boots.

I was really proud of K for understanding that a label and a high pricetag doesn't make for a better product. I would have bought her the real shoes but what she got was better. A lesson learned and what I think is a superior pair of shoes. I may even go back and buy her the other color. I asked her what's going to happen if one of those friends say something about the lack of label on her heel. She said she's going to tell them she's smart enough to not pay $100 for a label.

More words of wisdom from the six year old.
Posted by MicheleB at 6:25 PM