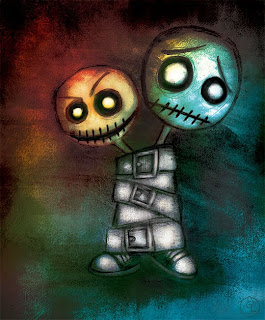 So in my research for something I'm writing called "Emotional Creatures of the Night" I came across something interesting and completely related to my discoveries. While I was happy to find out that other Psychological Explorers had stumbled upon the same things I have found, I was saddened to realize how many of these creatures walk among us every day. I had been aware of these people in my past but thought I had learned my lesson. Apparently not. These creatures are adaptable and blend in with chameleon-like ability.

OK, I don't want to give out all my secrets. I do want to share this list, it's the top 25 traits of Emotional Predators and to be honest, if I had a list like this
a few years ago I could have avoided some major drama. If for some reason you happen to be an EP you will not recognize having any of these traits. If you happen to be my EP, why are you still here?

* Put on the air of “having it all together” and will not readily admit failure or weakness
* Value religiosity’s rules or business protocol over spiritual growth.
* Jump to defensive mode readily and frequently.
* Take pride in their own righteousness and rightness.
* May apologize, but it doesn’t mean a real change in behavior.
* Run from their own problems rather than tackling them.
* Demand your trust rather than being transparent and earning it.
* Will blame others rather than take personal responsibility.
* Lie, using subterfuge and deception as tools.
* Are stuck in one level of maturity where growth is not an option.
* Only have eyes for “me, myself, and I” instead of “we.”
* Don’t understand empathy, except to fake it as a tool.
* “Give to get” by being nice or helpful only to expect reciprocation.
* Find out your weakness or fears to manipulate later.
* Are a black hole, working to get time, money, or talent from you.
* Expect you to lend a listening ear and give votes of approval.
* See you as extensions of themselves and resist your freedom.
* Will rarely listen to or respect your “No.”
* Use emotional withdraw to create guilt and compliance.
* Attempt to belittle any version of reality that conflicts with theirs.
* Will use the parental or child role to get what they want.
* Will betray secrets to feel more powerful.
* Can use flattery or sickly-sweet protests of innocence like a stealth weapon.
* Use verbal skills to block or deflect being confronted.
* Impact our lives negatively despite appearing to have some positive effect.

Yikes, that last one hurt the most. Be careful out there, EPs are dangerous, they walk among us and prey on our weaknesses. Luckily they too have a weakness, I will share that with you soon. In the meantime you might want to grab some garlic or silver bullets just in case.
Posted by MicheleB at 6:06 PM