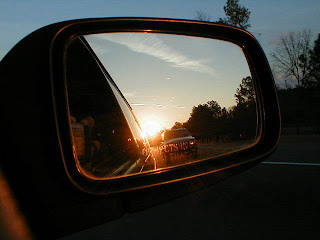 I guess these could either be bad 80s song titles or words to live by. You all know me by now, I'm certainly not one to live in the past so this wont be a long rant about that. I was going to gush about K and how awesome she is but I did that enough this week. D and I went back to Dr. Phil this week but I'm not going write about that either, I'm actually not in the mood to rant about anything today. I'd just like to share a few things that we did over the summer. Let you know what went on while I wasn't writing. I thought I would be able to go back and fill in all the holes but that would only be to satisfy my OCD and I'm trying to not let that rule my life anymore. I'll deal with the gaps and lack of symmetry on my own time.

08/09/10
K ended up booking the "Confidential Project" I wrote about here, after a confidential callback and fitting (where I was asked to sign even more agreements making a grand total of 8 confidentiality agreements signed). At the fitting they told us what the job was but I already knew that, I guess someone didn't read their paperwork. We were excited it sounded like a fun project. Now here's the thing: I signed so many things and never got copies of any of them. I knew not to talk about it before it was filmed but I cannot for the life of me remember what I was allowed to say after. K's part was cute and honestly had nothing to do with the product. They shot at a cool house in Pasadena and of course K and I were early. She loves to follow the yellow production signs to the location. We checked in and sat with the rest of the cast: a few kids, a fake family and a little person (who we had met at the fitting). I can't remember his name but he's been in a ton of movies but pretty much kept to himself. I think I know the reason too. One of the other kids there (a dead ringer for that annoying Jerry McGuire kid kept pointing and laughing and very loudly telling everyone "that guys is FREAKING ME OUT!" K was so upset by this and repeatedly told him to stop talking like that. She explained that he was a person just like anyone else and didn't deserve to be treated badly. I was so proud of K for showing such compassion and disgusted with the mom who didn't say a word.

Once the guy left the kid settled down and sat with K as she played with her iPad, he was fascinated watching her and we were all grateful for the quiet. According to the shot list K was last so we had quite a bit of time to kill. I really need to thank D for the iPad, at first I thought it was dumb, why do we have to have every single Apple invention? Our trip to Mexico proved how valuable that giant iPhone without a camera can be. On this set it provided entertainment for some kids, was a reading buddy to K and even allowed some piano practice to get done even though we were miles away from home.

When it was time for K to go to wardrobe most of the cast was gone, it was us and the crew, just how K likes it. They dressed her in her outfit (which was a combination of her own clothing and something the stylist picked out) did little with her hair and used absolutely no makeup, the director said he wanted kids to look like kids, he even told K not to worry about getting too dirty, just have fun. Cool! When they were ready for her she went into the house and they asked me to come too, I told them that she prefers to work alone but I would stay right outside the door and watch the monitor. They were thrilled with that. She did her thing which again, I'm not sure I can talk about, then they decided she needed to be holding a list of some items she discussed in the shot. They called for the art department to get it ready, while that was being done the director had K make the list herself and that's what they used in the shot. Her shots didn't take long and soon she flew out the door saying that she got a round of applause and a bunch of high fives. We went to sign out, grab our things and find the driver to take us back to my car. K said she wanted to say goodbye to the director and that I should ask him how she did. I told my darling girl that I know she did great by the way she left the set. Didn't matter, she needed to hear it.

So off we went to find her director, he was so sweet, he was in the middle of wrapping but gave her more high fives and when K told me to ask about her performance he said that she was awesome. The pride beaming from her face was so powerful surely glaciers thousands of miles away melted from the intensity. We got to my car and suddenly realized it was way past dinnertime. Craft services on this shoot was great but we both needed a real meal and a bathroom.

Not knowing the area we stopped at the first strip mall we passed, I saw an old school Italian restaurant but that was it, I didn't think it was for us but then I saw a sign with the dress code and I know it was for us. It said:

NO GANG ATTIRE
NO TANK TOPS
NO RAIDER LOGOS

Yup, we ate there and it was awesome. Not only was the food totally reminiscent of my old New York haunts, it was run by fellow football fanatics who shared my disdain for all things Raiders. The service was great as well. K was still riding high from her great performance and she told the staff that she just got back from a commercial. They were confused until she told them she meant that she was shooting the commercial, then she became royalty. Every five minutes someone was coming by to see how we were, what we needed and told K how cool she was. They wanted to bring her a dessert but she had already spied the Baskin Robbins a few doors down. We said goodbye and got her a giant sundae. I think she was asleep by the time we hit the freeway and I was thankful she got a cover for her treat.

It was a fun day for both of us. Not the most fun thing we did this summer but certainly blog-worthy since I planned this to be about my life as stagemom. Don't worry though, there's plenty of drama-worthy situations on the horizon. D has just informed me that his mother would like to come here for a visit. Can't wait to see how that plays out.

At least for now I remain, drama-free.
Posted by MicheleB at 12:54 PM