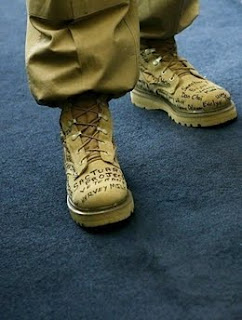 This is the tag for the photo above taken from Yahoo:

Former Marine Evelyn Thomas wears a pair of boots with names of former comrades who were discharged under the 'Don't Ask Don't Tell' policy. The US Senate has blocked a bid to lift a ban on gays serving openly in the military, thwarting the move with political maneuvering that now puts the issue on a back burner indefinitely.

At least my world is mad. I didn't want to make this a political blog but sometimes issues come up and I just have to rant. The whole Don't Ask, Don't Tell policy was ridiculous from the start. First of all who came up with that title? Better question is why? Honestly what difference does sexual orientation make while protecting and defending? Is there a Don't Ask, Don't Tell policy for drug abusers in the military? How about child molesters? I think those guys (and gals) are the ones who need the boot. I'm just dumbfounded by whole idea of this. My anger and disgust regarding this issue makes it difficult for me to put it into words. Rachel Maddow however, did a fantastic job. Here is what she had to say about: 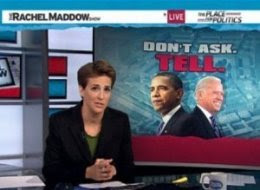 From Huffington Post:
Rachel Maddow had tough words for both the GOP and the Obama administration after the defense authorization bill that could have led to the end of the "Don't Ask, Don't Tell" policy was held up by a filibuster in the Senate.

Maddow, who has been a fierce and prominent advocate for the repeal of the law banning gays from serving openly in the military, delivered a 12-minute denunciation which led to one conclusion: the filibuster had nothing to do with the procedural issues Republican Senators raised on the Senate floor and everything to do with anti-gay politics.

She played clips of Republican Senators talking about everything from their inability to add amendments to the bill to concern that a military study of the efficacy of lifting "Don't Ask" was being sidelined. Then, Maddow contradicted all of those statements, pointing out that the bill would have explicitly put the question of a repeal into the military's hands, and that Republicans would have been allowed to add their own amendments.

Ultimately, Maddow concluded, the reason for the filibuster was clear:

Today Republicans did a historic thing. They chose to block funding for the entire U.S. military, and they did it not because of any of that window dressing procedural stuff they are trying to hide behind today. They did it because they want to keep this anti-gay policy in place. This is about the gays.

She also played clips of Republican Senators decrying the "far left agenda" of allowing gays to serve openly, and of predicting damage to the military if "Don't Ask" is repealed.

Maddow also noted that, in her interview with Vice President Biden, he had said that the reason the Obama administration was still enforcing "Don't Ask" was because "that is the compromise we basically had to make to get the votes to finally repeal it."
Clearly, she said, if that was true, then the other side did not hold its end of the deal up. She then asked if the White House would now cease enforcing the ban:

The White House could decide right now tonight to stop implementation of this policy pending the military's review. The right wants a culture war against gay people That's a war that in 2010 anti-gay politicians lose and pro civil rights politicians win. Does the White House leave that on the table and walk away, or do they try to win?

Watch it here.
Posted by MicheleB at 8:00 PM