So I finally have a night to myself. K is in bed and D is out with L. I had planned to write a rant about my MIL not calling me and D for our anniversary. Not that I was in the mood for that conversation, but if one is mending fences special occasions should not be ignored regardless of how she feels about our marriage. Which is clear by the lack of well wishes. I wasn't upset about it when I mentioned it to D, I was merely stating a fact that I thought was worth mentioning. So as I was procrastinating I spent some time on Facebook and found this story on D's page. How I missed it is beyond me but I felt a strong need to share it. Immediately. I don't usually cut and paste two days in a row but this is important and needs to be read. Please take a few moments to honor the memory and extraordinary life of Eileen Nearne, an incredible woman who led an unbelievable life: 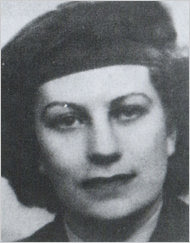 Eileen Nearne, Wartime Spy, Dies at 89
By JOHN F. BURNS
LONDON — After she died earlier this month, a frail 89-year-old alone in a flat in the British seaside town of Torquay, Eileen Nearne, her body undiscovered for several days, was listed by local officials as a candidate for what is known in Britain as a council burial, or what in the past was called a pauper’s grave.

After World War II, Eileen Nearne, here in a photo from that era, faded into obscurity.

But after the police looked through her possessions, including a Croix de Guerre medal awarded to her by the French government after World War II, the obscurity Ms. Nearne had cultivated for decades began to slip away.

Known to her neighbors as an insistently private woman who loved cats and revealed almost nothing about her past, she has emerged as a heroine in the tortured story of Nazi-occupied France, one of the secret agents who helped prepare the French resistance for the D-Day landings in June 1944.

On Tuesday, the anonymity that Ms. Nearne had cherished in life was denied her in death. A funeral service in Torquay featured a military bugler and piper and an array of uniformed mourners. A red cushion atop her coffin bore her wartime medals. Eulogies celebrated her as one of 39 British women who were parachuted into France as secret agents by the Special Operations Executive, a wartime agency known informally as “Churchill’s secret army,” which recruited more than 14,000 agents to conduct espionage and sabotage behind enemy lines.

Funeral costs were paid by the British Legion, the country’s main veterans’ organization, and by anonymous donors who came forward after the circumstances of Ms. Nearne’s death made front-page news in Britain.

The funeral organizers said that in accordance with her wishes, her ashes would be scattered at sea.

Ms. Nearne, known as Didi, volunteered for work that was as dangerous as any that wartime Britain had to offer: operating a secret radio link from Paris that was used to organize weapons drops to the French resistance and to shuttle messages back and forth between controllers in London and the resistance.

After several narrow escapes, she was arrested by the Gestapo in July 1944 and sent to the Ravensbruck concentration camp near Berlin, a camp that was primarily intended for women, tens of thousands of whom died there.

Ms. Nearne survived, though other women working for the Special Operations Executive were executed in the Nazi camps.

As she related in postwar debriefings, documented in Britain’s National Archives, the Gestapo tortured her — beating her, stripping her naked, then submerging her repeatedly in a bath of ice-cold water until she began to black out from lack of oxygen. Yet they failed to force her to yield the secrets they sought: her real identity, the names of others working with her in the resistance and the assignments given to her by London. At the time, she was 23.

The account she gave her captors was that she was an innocent and somewhat gullible Frenchwoman named Jacqueline Duterte, and that she had been recruited by a local businessman to transmit radio coded messages that she did not understand.

She recalled one interrogator’s attempts to break her will: “He said, ‘Liar! Spy!’ and hit me on the face. He said, ‘We have ways of making people who don’t want to talk, talk. Come with us.’ ”

From Ravensbruck, Ms. Nearne was shuttled eastward through an archipelago of Nazi death camps, her head shaved. After first refusing to work in the camps, she changed her mind, seeing the work assignments as the only means of survival.

In December 1944 she was moved to the Markleberg camp, near Leipzig, where she worked on a road-repair gang for 12 hours a day. But while being transferred yet again, she and two Frenchwomen escaped and eventually linked up with American troops.

Even then, her travails were not over. American intelligence officers initially identified her as a Nazi collaborator and held her at a detention center with captured SS personnel until her account, that she was a British secret agent, was verified by her superiors in London.
Asked by her postwar debriefers how she kept up hope, she replied: “The will to live. Willpower. That’s the most important. You should not let yourself go. It seemed that the end would never come, but I always believed in destiny, and I had a hope.”

“If you are a person who is drowning, you put all your efforts into trying to swim.”

Ms. Nearne was born on March 15, 1921, into an Anglo-Spanish family that later moved to France, where she grew up speaking French.

The family fled to Spain ahead of the German occupation of France, arriving in Britain in 1942. Ms. Nearne, her older sister, Jacqueline, and their brother, Francis, were recruited by the Special Operations Executive. In March 1944, Didi Nearne followed her sister in parachuting into France, remaining there, under the code name Agent Rose, after her sister was airlifted back to Britain.

The Gestapo had infiltrated many of the Allied spying networks, and Ms. Nearne lived on a knife’s edge. On a train journey to a new safe house south of Paris, her cover came close to being blown when a German soldier offered to carry her suitcase, which contained her secret radio. After telling him that it contained a gramophone, she hurriedly got off the train and walked with the case the rest of the way.

Describing how she lived undercover, she said after the war: “I wasn’t nervous. In my mind, I was never going to be arrested. But of course I was careful. There were Gestapo in plain clothes everywhere. I always looked at my reflection in the shop windows to see if I was being followed.”

In July 1944, the Gestapo arrived at her Paris hide-out moments after she had completed a coded transmission. She burned the messages and hid the radio, but the Germans found the radio and the pad she had used for coding the transmissions.

Parts of her story were later told in books written about wartime secret operations, including the 1966 history “SOE in France, 1940-1944,” by Michael Foot, part of a government history series by authors given special access to secret government records.

But wartime friends said after her death, on Sept. 2, that she had found it difficult to adjust to peacetime life, and a medical report in the government archives said she was suffering from psychological symptoms brought on by her wartime service. She never married, and she lived alone after her sister died in 1982.

Friends said that she withdrew into herself and shunned all opportunities to earn celebrity from her wartime experiences. In 1993, she returned to Ravensbruck for a visit, but otherwise she cherished her anonymity. As she told an interviewer several years before she died: “It was a life in the shadows, but I was suited for it. I could be hard and secret. I could be lonely. I could be independent. But I wasn’t bored. I liked the work. After the war, I missed it.”
Posted by MicheleB at 8:56 PM