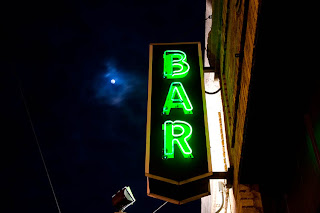 So starts the story of how I met D. I think I even wrote about this before. I was out with friends even though I wanted to stay home. It was the weekend before my birthday and I was in no mood to celebrate, I wanted to be alone and figure out what to do with my life. It was almost a year since Starter Husband I had separated and I needed to get the ball rolling on filing for divorce before he wore me down and I went back to him. I was talked into going out dancing because I was too tired to say no. I don't think I even brushed my hair. As soon as we walk into the club this guy comes up to me and asks if I want to dance. I tell him "not right now thanks" and I go off to find my friends. I end up at the bar and the guy comes back, "Wanna dance now?" he asks, "uh, not now" I tell him. He starts to walk away and I tell him that he can hang and talk, I'm just not one for dancing. I kinda felt bad for him, he was cute and seemed like a nice guy. My friends went off to dance and his friends stood across the room giving him the thumbs up.

We had a nice conversation over the super loud disco playing in the background. We were in the same industry (entertainment, go figure) and talked about that for a while, honestly I can't remember what else we talked about, it was loud and hard to hear. I succumbed to the dancing after a while, it was easier than trying to decipher the conversation besides the drinks were starting to kick in which always helps.

We danced for a while until my friends decided they were done, they were bored and had not found any boys. I was happy to be taken off the dance floor but was actually having fun with Mr. Persistence. He gave me his number and for the first time in my life I gave out mine. I had met other guys before but never felt the desire to give out my information, if I liked them I called them, I felt safer that way. This guy was different, he seemed really nice, his friends high-fiving him on the dance floor was a little dorky but I wasn't one to judge. We said goodbye and I kissed him on the cheek, shocking my friends who had never seen me so much as wave goodbye to a guy in a bar.

Eight year ago today, I married that guy. It always makes me laugh when people ask how we met, they seem to expect a long drawn out romantic fairy tale or a story of epic proportions. Nope. We met at a bar. A completely modern tale of two people who happen to be at the same place at the same time. Was it fate? Destiny? Kismet? Nah, more likely it was the DJ at Kane who had a kickass playlist of groovy disco classics. D likes to tell people that he saw me there as soon as he walked in, that there was a light shining over my head but I think that it was the club lights reflecting off my dirty unbrushed hair.

Not that I don't believe in romance, our first date that next Friday (yes I agreed to a first date on a Friday, I didn't follow the LA dating rules) was wonderful. We learned that we had plenty in common including a love of football (even though our teams were mortal enemies) and sports bars. Our relationship didn't follow the rules either, we went from on again off again to friends only back to on again. I went from separated to divorced and moved from my cool but empty bachelorette pad to a duplex with friends until moving in with D.

We went from dating to cohabitation to engaged to married in three years.

It seems like it wasn't too long ago that I walked into that bar, I can still remember what I was wearing and how much I didn't want to be there. I can distinctly remember D coming up to me over and over again and feeling completely disarmed by his smile instead of annoyed by his persistence. I remember more about the night we met and our first date then our wedding (which is a blur to me sometimes). Luckily Earth, Wind and Fire wrote a song about that night, a song that I am positive was playing in the club on the night we met:

Do you remember the 21st night of September?
Love was changing the minds of pretenders
While chasing the clouds away

Our hearts were ringing
In the key that our souls were singing
As we danced in the night,
Remember how the stars stole the night away

My thoughts are with you
Holding hands with your heart to see you
Only blue talk and love,
Remember how we knew love was here to stay

Now December found the love that we shared in September.
Only blue talk and love,
Remember the true love we share today

Some bells were ringing
Our souls were singing
Do you remember,never a cloudy day?

I'm glad you walked into that bar.
Posted by MicheleB at 10:54 PM