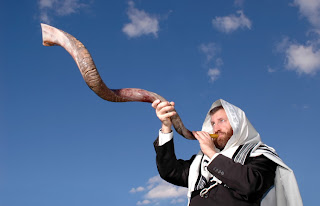 I never knew I was in a mixed marriage until I joined the synagogue down the street. I wanted K to go to the preschool there and one of the requirements (actually, it was the only requirement besides paying 10K of course) was to join the congregation. When I told the membership director that my husband wasn't Jewish she said that there were many mixed couples that belonged to the synagogue. Mixed? I had never really looked at it that way. I just thought that I was Jewish and D wasn't. Since he practiced no religion I didn't see it as any kind of mix. There was mine and that's about it. I never thought about how other people saw it. I told the director that D didn't practice any religion but he was happy to honor mine and had no problem with my desire to send K to a Jewish preschool. She asked if he had thought of converting, my laughter was her answer.

I was raised in a Jewish-lite household, around every six months we celebrated the holidays. That's about it. Starter husband's family was a little more into the religion and I happily obliged their way of worship. It was nice to have a Seder with 30 people yelling and screaming and sitting in shul was actually fun with my former sisters-in-law.

Then it was just me. The first year I was alone for Rosh Hashanah turned out to be the same day I was supposed to go the Emmy's, not to work but just to hang out with an all access pass. I decided it was better than sitting home alone and feeling sorry for myself. The next week I flew to New York in a last ditch effort made by started husband. Didn't work but I was spared a holiday alone. After that I manned up and bought tickets to synagogues near me.

When we moved to where we are now I marveled that I was a block away from a synagogue (I don't use the word "temple" for many reasons, one of them being I've never been a reform jew and they tend to use that term. The original or First Temple was destroyed by the Babylonians and was the site of sacrificial offerings. Just giving some facts.) The first year I went I was given tickets from a friend who wasn't going to use them and thought that I should. I put K in the daycare, which was the preschool, immediately I knew that she would someday soon end up there. I liked the service and felt very comfortable there even though they sung all the songs differently than back east.

I went back every year and when K was a student I went with my new friends and she got to sing and dance in a place she knew well. It was what I always envisioned except my husband wasn't there with me. He always asked if I wanted him to go, I always replied "only if you want to" and he never did. Which was fine, he was always there at school events and did the Shabbat lunches with great enthusiasm. I called him Jewish by association, an honorary MOT.

So that brings us to today. I let my membership at the synagogue down the street expire after the school director pissed me off by telling me that putting K in kindergarten early was depriving her of a year of her childhood. Not kidding. Even though we were no longer members we were welcome at the family service without a ticket, these services were so crowded they rented out a local theater to hold them. We go every year. We also take a walk back to our old shul for the final evening service, we've never been asked for a ticket there either.

Today D took K to karate and piano while I stayed home to atone in peace. I had time to think about what it was I wanted from my religion or any religion. I found no answer. D came with us to the family service and it was wonderful. It's not a deeply religious service (because it's for kids) but it's spiritual and meaningful. The rabbis explain the general idea of the holiday in a way that makes it fun and keeps their attention for the whole service. I always cry in these services. I look around and see the multi-generation families having a good time together. I always think of my paternal grandparents on this holiday. Not only because Yom Kippur is a time to remember those who are no longer with us, but I think of how much joy they would get from seeing K get into the whole thing. I know it's weird but every year on this holiday I can feel my grandparents with me, the tears are for sadness and joy and I get them every time I see K singing and dancing around knowing that they can see her too.

Every year I vow to be more involved in all things Jewish but what I really need is to be more spiritually involved. That does not require a synagogue. I spent a lot of time alone today, time spent thinking, reflecting and hoping. While I did enjoy the introspection there was something missing. Not sure if it was the location or lack of family. I felt complete when we all walked in the service even though we didn't know anyone there. Somehow I need to bring that feeling home. Sure it's great to honor the traditions of our fathers but that doesn't mean we can't start our own right?

So I'm feeling pretty good with the direction this holiday is taking me and then K and I go to the evening service down the street. When we walk in to the sanctuary we are both overcome by a feeling of peace. We found seats and K wrapped her arms and hands around me. She rubbed my back as I tickled hers, she grabbed my hand to come with her when the kids were called down, it was wonderful. We were in a room full of strangers and it still felt like home. When K saw other people cry she didn't ask why, she knew. When strangers smiled at her she smiled back, genuinely. She didn't complain that she had no friends there and she didn't make make me get a brownie for her when it was time to break the fast. She was acting like a big girl, a girl who was comfortable and proud to be where she was. Walking home she asked if she could go to synagogue again. After I brushed away the tears I said of course.

I'm not saying that we're going to run out and rejoin the synagogue but I will do my best to recreate the feeling we both got today. We are fortunate to live close to the Lake Shrine a wonderful place I took K when she was a baby. A place where all religions are represented, a place where that feeling of peace is not only mental but physical, the place is so beautiful. While I was thrilled to experience an old family tradition with my daughter today, I look forward to starting new ones and incorporating them into our lives. It will be a mix of this and a touch of that.