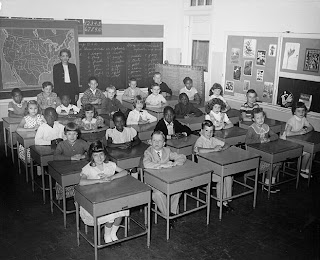 It's been such a productive week already! Got the blog up and running again. Got the kid settled in school. Got my fantasy football team in order. The best thing about this week? A lesson that was learned the hard way.

K got called for a film audition a few days ago. I was nervous about auditions during the first week of school, I haven't had a chance to have "the talk" with her teacher yet. Luckily it was scheduled for after school. The role was a lead in a horror film being shot on location in New Orleans. The character is a beautiful blond girl who is haunted by a dead man trying to help her. K would have to learn eight pages of dialogue, which she has easily done in the past.

After homework and reading we tackled the scenes. I was surprised to see that K was struggling with it. Even the first few lines which were pretty simple. She had two scenes to learn but we focused on the first which had more lines but was easier. After a while it became clear that it wasn't working. I gave her the script and let her do the reading with it in her hands for help, that was better but she was flat and uninterested. We stopped and I asked her if I should cancel. She got upset and told me she could do it. "That wasn't the point," I said, "do you even want to?" "Yes mama, I'm just not doing my best right now." she replied. That really broke my heart and I was conflicted. Again I asked if she was doing this for me because honestly she didn't have a chance in hell of getting this part, it was mainly going to be for the experience and to get in front of a new CD (casting director). She said she really wanted to try and she promised me that she would "give it everything." We tried and tried and even went on to the next scene, still she had difficulty.

At this point I started to get angry. Not so much because she couldn't remember lots of lines but she really was not giving it her best. She was fidgety which drives me nuts. I had to practically sit on her to keep still. This is an ongoing problem, not specifically related to the acting/modeling thing, she does this when she reads as well. So what happens when you don't give your best? Nothing good, I'll tell you that. Instead of trying harder she slipped into victim mode and said that she can't do this, it's too hard. I reminded her of the 10 page script we got a year and a half ago when she read for "24" not only did she memorize her lines but those of Jack Bauer's as well. She didn't get the part but did so well she earned her first two Webkinz.

This time the only thing she was earning was an impatient mother. I hated feeling this way and wasn't sure what to do. If we went and she didn't know the lines, that was fine. It happens all he time and at least she tried. If we went and she not only didn't know the lines but felt insecure about it she could take that kind of failure with her for a long time. She said she'd try again with D when he got home. That didn't really help either. I told her that I think we should just cancel, because if her heart wasn't in it her audition wouldn't be fun. She said that she didn't want to disappoint anyone but this particular audition was something she just didn't want to do. I told her that making a decision like that was a very responsible one. I emailed K's agent and told her the truth. I had planned on saying that she wasn't feeling well but then I decided that the truth would be more effective, I let her know that we had some difficulty with the script and while we usually always go to auditions we know aren't going to end up as bookings on this one we would take a pass. Normally I would feel bad or guily about this, I would worry that she won't get sent out on other movie roles, then I thought about my daughter. If it's not fun it's not worth doing. If they don't send her out, who cares?

I'm keeping the script though. In a few weeks I'll try again, just for fun to see what happens. I had been thinking about how tough this week was for me but never fully realized how it must be for K. New class, new teacher, new responsibilities at school. It's a lot for a second grader, especially for the youngest second grader in the school.

So today, instead of driving to Hollywood to do something that my little girl isn't ready to do I'm going to take her for a treat (after she does her reading, of course). She does a lot, this little girl of mine and sometimes I forget that she's just a six year old. Her abilities and personality makes her seem years older and sometimes I need reminders like this to bring me back to the mother and child role I cherish so much.

Childhood cannot.
Posted by MicheleB at 10:06 AM