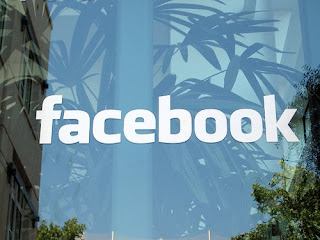 I love Facebook. This is not news to anyone who knows me or anyone who has read my blog before. I adore posting pictures of K, so much so that friends who have never met her recognize her when they see her in a store window. I love to play FBVJ (Facebook Video Jockey) posting songs that I like when they pop into my head. At times I was a political activist relentlessly posting links to things that I was either fighting like hell for or violently against. I also love making comments on friend's pages and became so accustomed to communicating virtually I sometimes forget which conversations happened online or in real life.

At the start of the new year I vowed to have more face to face and less Facebook. More actual and less virtual communication. So far so good. I started this post on the 5th and now it's the 13th. I guess that gets in the way of writing since I'm not as MAC-attached as I was in the past. It's been nice having lunch with friends, seeing things rather than reading about them. I've even tossed aside my no-going-out-on-a-weekday night to see a friend's band play. Twice! Of course now that school is back I may adhere to that rule. K has a habit of staying up until I get home, not a good mix with a 7AM wake-up.

Last year I hosted a virtual cocktail party and it was amazing. Chatting and drinking with my friends was a blast. I'd love to have a real event like this, I might even set up the iChat for the friends that live across the country. I don't have to be in my sweats on the couch to enjoy my friends. How hard can it be? A trip to BevMo, a quick coat of paint (for me) and about five minutes of vacuuming (for my dirty floor) and voilà, instant party. I might have to use evite or texting to let my guests know but that's minimal use of the computer.

Some Facebook is necessary, being a transplant means you have left all your friends and family behind so I do need to use social networking as a way to share certain things. I hate having to send out individual emails when we get new pictures, although the PIAs (otherwise known as Mother and Mother-In-Law) aren't on Facebook so I do have be inconvenienced sometimes, which I prefer over having to explain exactly why the PIAs cannot be my Facebook friend.

I've also tried to tone down the politicizing because honestly, it just pisses me off. I know that most of my friends are on the same page as me in that area. I have agreed to disagree with the ones that are not. Fueling fires isn't my thing this year.

I will need to get over my fear of missing something, although being surprised isn't necessarily a bad thing. Last year I found out that K had lost out on a commercial when it was posted on an agencies page. It might have been better to just wait and hear it the old fashioned way. Of course finding out that a friend is in labor or pregnant immediately is pretty cool.

It just comes down to finding a proper balance, which is what life is about anyway. When the scale is tipped to one side something is missed.

Here's to all things being equal.
Posted by MicheleB at 12:45 PM