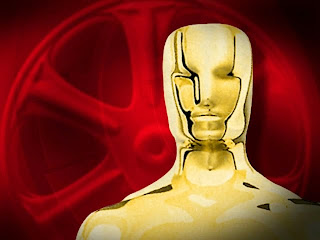 Usually the studio with the best PR and marketing team, but that's just my opinion. Today is Oscar Day and everyone in this city, at least those of us who aren't seated at the Kodak, already has their eyes glued to the TV. There's already Facebook discussions about who is is dressed beautifully and who looks awful. While I can appreciate beautiful clothing, lovely hairstyles and priceless items of jewelry I cannot understand the obsession over it. Tomorrow people will be talking about Sandra, Meryl and Mariah like they were old friends. My friends will call me tomorrow and ask me if I thought Miley's dress was inappropriate. The truth is, to me it's all inappropriate. If I thought that these type of shows were anything more than self-serving "aren't we great" monumental wastes of time I would totally be into it. If they aired the Sci-Tech Awards or even the inaugural Governor Awards I would understand the hype because these are the people that make movies possible, the innovators and technical geniuses that get things done.

What garners the most press is usually the vapid and vacant rambling of the Hollywood elite, I know that this sounds bitter but it's not. I don't really care that Harry Winston is lending out million dollar jewelry or that Armani specially made a gown. Even the speeches are full of self indulgent BS. I just heard a costume designer start her speech with "I already have 2 of these!" uh, way to be humble. I am thrilled to death that Mo'Nique won for her amazing role in "Precious," when I read the book I wondered who would be brave enough to take on a role like that. In her acceptance speech she said what I've always thought "It should be less about politics and more about performance" she's so right. During tonight's egofest (which we watched because D knew a few of the nominees) there were some great moments, the tribute to John Hughes was wonderful and I always tear up during the "Dead Hollywood" portion of the show. This year was especially sad for me, while I'm always shocked to find out that I had no idea who died on any given year, tonight I found out that one of my favorite clients from my NY post house job passed away. Robert Woodruff Anderson, the famous playwright who penned "Tea and Sympathy." I always loved when he came in, he and I would sit, sometimes for hours, while he told wonderful stories of all the work he did. He was pretty cool for an old guy and the project he brought to me was a TV movie he wrote about a court case involving a comatose woman and abortion. Pretty intense stuff for the times, and even today.

I totally got off track, I have nothing against giving props where props are due, in fact I love it when great work is rewarded. I just think that it should be about the work, about the struggle and about the finished product. I know how things work in this town, I've been here long enough. Sometimes hard work is rewarded, sometimes the underdog prevails, but for the most part it's about the bottom line. Sometimes it is about the performance but usually it's a popularity contest. I'm thrilled that Kathryn Bigelow won, I thought The Hurt Locker was incredible. D and I just had an discussion about why James Cameron didn't win. It had nothing to do with which movie was better or even which was one technically groundbreaking (because clearly that would have been Avatar, don't tell D I said that) it's about how the Academy members voted. Maybe they thought it was time for a woman to win. For the first time, in a long time a woman brought an Oscar worthy film to the table. I'm sure making a war film helped, Hollywood has always been a boys club and for a woman to break though it would have to be with balls, and that movie was full of that.

I wouldn't go feeling sorry for the losers of tonight's lovefest. They didn't go home empty handed, they all leave with studio deals, points and contracts that will make them a small fortune. They will go off to parties that will last until tomorrow, with gift bags worth more than most people make in a year.

Tomorrow I will do my best to avoid conversations involving Oscar fashion and hairstyles. I will try not to talk about "The Year of the Woman" and how great it was to see the ex wife win over her egomaniac ex-husband. I will talk about Mo'Nique and how she summed up my feelings on the evening, I will talk about Gabourey Sidibe's Cinderella story and how dreams in Hollywood can come true. I will think about the great things that are possible when hard work pays off, I might even think about what I will wear to the Oscars when D is nominated for Best Editing.

If and when that happens please do me a favor, go easy on me.
Posted by MicheleB at 5:22 PM