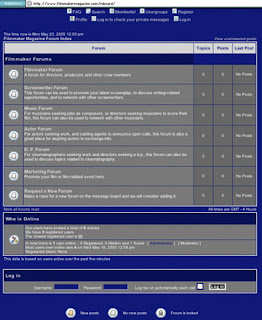 I belong to a lot of online message boards: a very popular group for parents on the Westside, K's school, photography boards, restaurant boards, discount shopping boards, political boards, you name it, I've posted a message in it. I think I even signed up for a group sharing my dislike for Vonage. These groups are wonderful if you're looking for information on a particular subject, I used to go on my Westside parents board all the time for activities, preschool recommendations and even to find out why the traffic on PCH was bad. These women (and even a few men) knew all the haps and I learned so many things about the Westside and what it had to offer. After a while I would reply to posts offering my opinion on a certain restaurant, preschool or boutique. At one point I was the resident stagemom, offering one on one advice about child modeling and acting. I even got a few kids signed with agents. I still post from time to time but it got to be too much.

Instead of being a place one could go for help and information it became a sounding board for agendas. Stay at home vs working parents, breastfeeding over bottle feeding, cotton diapers instead of disposables. Who cares, I just want to know who does a Brazilian Blowout that doesn't cost a fortune and the name of that babysitting service everyone uses. I still go back to the board daily, but only to check out what's new on the Westside, and occasionally offering advice to parents who are looking to start the kid in modeling and I always reply individually, I stay out of the "evils of child modeling" conversations.

Yesterday I went on and did a search for baking supply stores, hoping to find one a little closer than the place I usually frequent. I saw a post from a woman telling everyone that she and her child got sick after eating at a local (and one of my favorite) burger places. What a bummer, I hate when that happens, I've been to this place a lot and never had a problem, hope she's OK. Today I went on to let people know that a giant tree had fallen close to my house and was now in the middle of Sunset Blvd causing a traffic nightmare, before I could hit the "post new" I noticed all the "I got sick from" posts. Ugh, I hate when this happens. I forgot all about the warning I was going to put up and read all the threads about the burger place. Apparently everyone and their mother has gotten ill after eating there. That's funny, A and I went there all the time, we took our very young daughters there for their first cheeseburger. We never got sick, our kids never got sick and as far as I know nobody we knew got sick after going there. This is a VERY popular place with many locations around Los Angeles.

This is not fast food it is delicious and awesome and now it will be empty for a few weeks until the next place these women decide to ruin is discussed. The original poster on the board didn't exactly say it was from the burger place, just that she and her daughter had stomach pains that night and the day after. What followed was everyone's stories about how sick they got and how awful the service is. It's a popular place, sometimes you have to wait. Also, the burgers are huge and the fries are even bigger. I'm sure if I ate all that was on my plate I would be sick too, but that would be the fault of my eyes being bigger than my stomach. Not the result of improper food handling or inferior products as the message board would have you believe. No one should eat that much food in one sitting. There were plenty of people that shared their stories of positive experiences and I was one of them, it's a shame the bad outweighed the good by a huge margin. There are people posting that they always go there without incident but will never step foot inside again. There's even talk about calling the health department and worries about fatalities WTF? I did a search and found nothing negative on this place or any of it's other locations.

Why is this kind of anonymous public lynching so popular?

As I write this, there's a highly regarded local sushi restaurant in the news for serving illegal whale meat. They were uncovered by the the team behind Sunday’s Oscar-winning documentary film “The Cove.” For this reason I will never go there, this is a valid reason with actual video footage of the offense. The filmmakers are currently working with the United States attorney for the Central District of California and charges could come as early as this week. This kind of "protest" I can fully understand. There were about four posts on this subject.

Basing my patronage on speculation is ridiculous. I did a search on the message board and found nothing but positive reviews before the original poster wrote her message. Now all of a sudden 50 people have something bad to say? If they thought for sure that they got sick at this restaurant why wouldn't they have posted about it when it happened to them in the first place? These are the same people that were sure they had H1N1 and posted to see which schools were known to have cases of the dreaded flu. I also did a search of other "places to avoid like the plague" and found the same thing. Before the original poster wrote about a bad experience, whether it was a restaurant, clothing store or even school, mostly all the posts that came before it were positive. All of a sudden one person's negative experience turned into a viral nightmare for businesses all over the Westside.

Why isn't like this on the flip side? Why not follow up a good experience with stories of good? If I've had a negative experience somewhere I contact the establishment directly and try to figure out why it happened and try to rectify it. I would never think of publicly disgracing anyone's business. I once had a bad experience at a local store and they were not good at all about resolving it. When a woman wrote about her own awful experience there I felt bad as the story was truly terrible. I privately wrote to her and we had a dialog about it, she was grateful that I had taken the time to share my experience rather than just complain like everyone else did. She was able to move on and was thrilled when I gave her a better alternative. All done without public scrutiny.

The internet has brought the entire world to our fingertips, what an amazing gift. I think about my message board and all the information and advice I got when I was a nervous new mom. All the questions I had that were answered immediately and with loving care and kindness by strangers, the same strangers that are now fighting and complaining. I hope these strangers find a way back to the kindness that once flowed freely from the posts. Until then I will find my answers elsewhere. I will still check in from time to time to see if I can be of help and comment positively when necessary.

Tomorrow I'm meeting A for lunch, I know exactly where we are going. Our favorite old burger hangout. I know there won't be a wait and the food will be great.

I may even post about it.
Posted by MicheleB at 4:23 PM