Coffee, Tea or me? 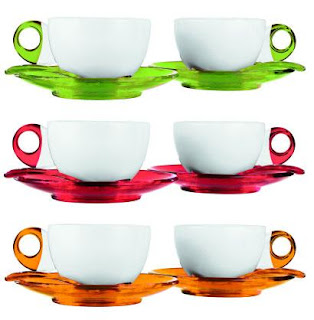 I was pretty excited when I heard about the Coffee party on Facebook. It was only a matter of time before Obama supporters answered the Tea Party movement. A kinder gentler grass roots movement for those of us who do not feel represented by our government or the media for that matter.

I looked up events in my area for last Saturday's National Coffee Party Day and found a few, nothing close. I talked to D about hosting one of our own, he thought it could be cool, I said I would look into it further. Then I thought about it, basically these events were the first step of a long term process. Stage one was about coming together as a community to create collaborative environments for practicing democracy, debating the issues that concern us like health care reform, climate change, immigration, same-sex marriage, foreign policy and the list goes on. First of all, there's no debating here, we'd all be on the same side of the fence with most of these issues. We would really be discussing what we can do to get the government to hear our voice. Don't we do this every day? I understand that bringing like minds together might make it seem like a more organized effort but isn't that what we did when we voted for Obama?

After careful consideration I decided against hosting my own Liberal Coffee klatch, not because I was against the message or the way they were going about getting that message out there. I am thrilled that there will be a response to the Tea Party movement. I look forward to seeing a diverse crowd of individuals with correctly spelled signs hitting the streets. I anxiously await television interviews with Coffee Party people explaining their agenda clearly and concisely without hate and anger. I even love the name Coffee Party. Not only for the clever antagonistic antithesis of the Tea Party but I love coffee and anything related to it. I would love nothing more than to grab a latte and discuss my views and opinions of the issues that matter to me the most, but I do this every day. Most of my friends and some of family are already on the same page, adding strangers to the mix would be fun, the conversations inspiring but then what? I remember doing this very same thing in the Summer and Fall of 2008. I remember it started out peaceful like this and then turned into a full on Red against Blue war. No thanks.

I'm sick of choosing sides. Seriously, the whole Right vs Left thing (which I already wrote about) gives me a headache. Every issue needs to claim an alliance: abortion, the death penalty, immigration. Even in our daily life it's Coke or Pepsi, Edward or Jacob, McDonalds or Burger King (ewww to both) and of course Starbucks or Coffee Bean (there's no contest there). Soon enough the Coffee Party people will start to disagree as to how their message should be spread. I can see offshoots of this: the mellow ones will form the Decaf Coffee Party, the ones looking for a fight will be the Double Shots and the extremist will go off on their own to form the Red Bull Party.

Both Coffee and Tea parties have many common bonds they just differ in the execution of the message: Tea people condemn the government as a whole while Coffee people are not against government involvement just the corporate stranglehold that seems to exist in our nation's capitol. The formation of the groups differ as well, it seems to me that Fox News and other Right wing media outlets (please no comments regarding that one, dad) were instrumental in gathering it's members while the Coffee Party membership was built almost overnight on Facebook.

Regardless of how or why these caffeinated political groups exist one thing is clear, they emerged for the same reason: They both felt a personal connection to the problems we are currently facing as a nation and are trying, in their own way to find a solution. Call it what you want, grass roots or astroturf, at least we aren't burying it under the rug anymore. Besides we can't, the skeletons from the previous administration are still under it.

So while I love coffee I won't be planning any Coffee Party events any time soon. This doesn't mean I won't stumble upon one during my many latte breaks during the week, I may even grab a seat and throw some ideas around, but that's about it.

Unless both sides decide to come together and form the Human Party, I'm staying out of it.
Posted by MicheleB at 6:52 PM