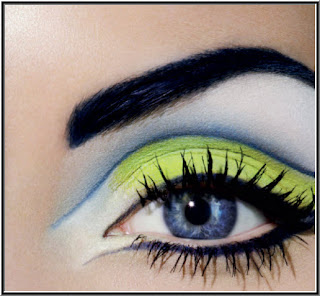 I am a total product junkie, I have closets and drawers full of makeup and beauty products. You need it? I've got it. I don't really use most of these things, I just have an obsessive need to covet them. During the holidays I do much of my shopping online and scour the internets for great deals. I often randomly purchase amazing bargains and then decide to whom they should be gifted. Makeup deals seem to abound around this time and my "gifting" collection grows and grows. How can I pass up a complete collection from Tarte for $40? I mean seriously, it's a $250 value! A lot of this stuff goes out the door as gifts, some of it goes in my cabinet so I can make gift baskets during the year and some of it goes to me, just like I had planned.

It's not that I don't like to wear makeup, I love to, I also need to wear it, I just don't know exactly what to do with it. I get the basic stuff, concealer over moisturizer, powder over that. Then some eye stuff and mascara (love long eyelashes!!) Also there's a bunch of eyebrow stuff involved. I had a bad eyebrow waxing experience so I do my own now, big mistake, but thanks to my Anastasia Brow-Express kit you can't really tell, and if you can, just don't tell me. I miss getting my eyebrows done, I was almost at that perfect shape too, I had removed my tweezers from my "toolkit" after promising not to use them and they were shaping up nicely. Then the chick left, I was assured her replacement was just as good. Oh no she wasn't. I was miserable and back to square one. Then during the summer K and I were on a playdate with my friend J and her daughter E, J decided we all needed makeovers, she did the kids hair and makeup and then went after me with careful attention to my eyebrows. She went a little overboard and I went out the next day to buy my first ever eyebrow kit, who know such a thing even existed? I was thrilled, it had stencils, powders, brushes, everything I needed for the perfect brow, or to clean up a mistake made from too much Cabernet. Did I say we had some wine? Girls, do me a favor, always turn down a makeover if it's done with wine. Just trust me on this.

This past Monday my bestie A invited me to a private party at the BeneFit store in Santa Monica, this is one of my favorite brands (their products have awesome names like Dr. Feelgood, Dear John and Sugarbomb, how cute is that?) and I was excited to go. Then K got called for a late audition, A said it would be OK to bring her since she's one of those kids that does well around adults, especially around girls and makeup. We were a little late and I was annoyed, the store was doing a complimentary treatment, and I'm a sucker for that as well. I got there in enough time but I felt rushed, they assured me that there was plenty of time to do whatever I wanted. What I really wanted was an eyebrow wax but (not to bash or anything) BeneFit was the scene of my eyebrow crime. So I settled on an eyelash tint.

Just a little background on me: I like spa treatments and all that girlie stuff but I have issues with people I don't know touching me, so while I enjoy whatever it is I'm getting, there is a bit of stress involved. I specifically hate anyone coming near my face and eyes, so I have no idea what spawned my desire to have someone place black dye on my eyes. That's such a lie, of course I do, the possibility of having beautiful black shiny lashes without having to clump on mascara every morning was a dream come true. Vanity trumps fear in my world. So I let this girl cover my eyes with Vaseline so the dye wouldn't spread and I was told to keep my eyes closed for 20 minutes. This was told to me after she put the dye on, I had a 6 year old running around a makeup store knowing her mom was immobile, this was going to suck. It was actually relaxing, A had taken over as K's mommy (they adore each other) and for the first time that day I got to relax. I could hear K laugh with the girls and then delight in the fact that "Love Train" had started playing, she then went into a dance, which I couldn't see but heard was adorable. I heard another girl next to me opt for the same treatment and we laughed about looking ridiculous. About that time my eyes started to burn, I tried to just relax, bringing it up would have caused me to feel worse, thinking about it wasn't any better. I did my best yoga breathing (like I use when I get pissed off at my mom or MIL) and in minutes it was over. I was cleaned up and brought to the mirror. I was so excited!!! I looked and saw.....not much difference, oh well. At least I didn't pay for it.

As we left I was handed a goody bag (free makeup!!!) which actually made the whole experience worth it. I am such a sucker for anything free, especially all wrapped up in a pretty pink bag. I went home put K to bed and fixated on my eyelashes and then my eyebrows. I started looking up places that did eyelash tinting to see if I can get better results. What do they call people like me? Glutton's for punishment? Not only did I get sucked into yet another beauty ritual but one that goes against all I stand for!!!

I suppose I could be one of those girls that takes hours to get ready, but it gets boring. I'll do it if we have a wedding or dare I say it, date night. I want to be able to look stunningly beautiful with zero effort so I buy all these products and hope that they work through osmosis. They don't. I will now become obsessed with eyelash tinting to achieve the perfect lash look and have it look real. After a few times having my eyes burn I'll hopefully move on to something else. Summer is coming and that means sandals, that also means that my boot wearing feet will need lots of TLC, that means pedicures (I try so hard to do it myself but I fail miserably) every few weeks. This might be worse than the eyelashes. I absolutely can't stand anyone touching my feet, but to look nice in my cute summer shoes I will endure it. Even when they scrape the bottom of my feet, which for some reason is the only time I am ticklish, I will not complain because in this case the end totally justifies the mean.

I never thought of myself as vain, but I suppose I must be if I'm willing to break so many of my rules just to look good. It gets worse, lately the lines on my forehead have been really bugging me, especially the deep awful ones between my above mentioned eyebrows. I have been looking into filling them with some kind of poison. The threat of poison being injected into my head is actually lower on my list than the way those lines make me feel. I remember looking at my grandma E and thinking how beautiful she was, how happy she was with the lines on her face that took a lifetime to earn. While I strive each and every day to be just like her this is when area where I'm going rogue (yeah, I said that). I'm going to fight that, sorry grandma, I love you but you never had to live in Los Angeles, this is a tough town.

A while ago K told me one of her friends said that I looked like a teenager. While that kid's parents clearly need to take a trip to the eye doctor, I was happy to hear that, K was happier, she told me she loves having a cool young mom. I love that she thinks that. I also love having an arsenal of beauty weapons at my disposal to keep my little girl happy.