Not Because I said So!! 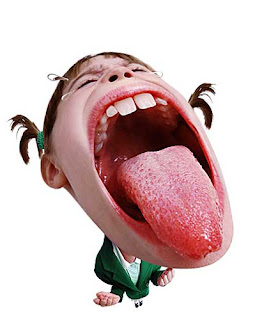 "Because I said so!" Words I heard all the time growing up, just like everyone else I suppose, and like everyone else, I vowed to never repeat them to my child. That didn't last very long. Sometimes I'm just too exhausted to give K a detailed explanation for my decision on something. Of course immediately after muttering these words I follow up with the actual reason. Why shouldn't she hear the explanation for what is going on and why things are happening? When I was I kid I got that reply for everything, it was a standard answer from my mother:

Why can't I play with my friends?
Because I said so

Why can't I go on the overnight school trip?
Because I said so

Why can't I go to Hebrew school and have a Bat Mitzvah?
Because I said so
(yeah, never really got that one, I was ASKING to go to school!!)

You get the picture, I understand using this because explaining things to a small child is sometimes difficult, the thing is I was older and still getting the same answer. Why not tell me the truth? I can't hang with my friends because I had to watch my little sister and then make dinner, I can't go on the school trip because my stepfather wouldn't let me, I have no idea why I couldn't go to Hebrew school, that one pissed me off. Although looking back on the Jewish aspect of my life I never once went to synagogue with my mother, it was always my dad, his family or I tagged along with friends and their family. Interesting. Might have to follow up on that one. Either my mother was sparing me the real details of what was going on (like I didn't already know) or she was uncomfortable with the answer. I'm pretty sure I know which one it is.

I believe in being open and honest with everyone and that includes my daughter. I want her to know what's going on and the real reason for it, I also want her to let me know the same thing. I don't make her do things that she really doesn't want to do, unless it's completely unavoidable. When she doesn't want to eat her vegetables I ask her to at least try it, she'll usually comply, eating a small bite and then scrunching up her face in disgust. When she came to me early in the school year to tell me about a girl in her class who wasn't too nice we talked honestly about friends. I told her it was OK not to like everyone, she didn't have to play with this girl if she didn't want to, she didn't have go out of her way to be nice but she couldn't be mean about it. When this same girl threatened to tell the principal on K if she didn't play with her I told K to go ahead and let her. I have no problem coming down to the school to back up my daughter, I told her that no matter what she would never be in trouble for sticking up for herself. When a situation with this girl came up she told me immediately and D and I took care of it. K knows that no matter what happens being honest will always yield a positive result.

We use this same philosophy with K when she goes out on an audition or books a job. I let her know that she has an audition when I find out and then I ask her if she wants to go, and she usually does. She enjoys the whole process and almost always gives her best, but sometimes she doesn't. When this happens I tell her that we have a deal, if she agrees to go she has to try, when she doesn't I tend to get a little angry. Not because she isn't going to book the job (because we NEVER think about that) but because she didn't try her best. I would do the same thing at her piano lesson, hip hop class and even in our baking adventures. Yesterday she had a print audition in Hollywood, when I told her she was upset at the thought of missing her Friday "treat" a tradition we started in Kindergarten. I told her that not only could we get the treat but we could also have D meet us since we would be close to his studio. She was thrilled and promised to do her best. When I got the call for this audition they specifically said they wanted to see the kids "as is" meaning no perfect hair, no perfect clothing and no phony flipper (fake teeth, yuk!) smiles. No problem, K was as real as they come: her hair was a mess, her clothing was filthy and she doesn't have fake teeth. I did try to get the dirt off her face, I'm sure they didn't want that. On the street we passed a mom furiously brushing her perfectly dressed daughter's hair, I could hear the poor thing begging her mom to stop. At the door we saw an adorable little girl crying hysterically and her mom yelling at her because she didn't smile. WTF? Like I said I can get annoyed at her but making her cry about is awful. I have a feeling that when these little girls ask why they have to do this the answer they get is "because I said so."

I know that this happens a lot with kids today, parents are overcompensating by filling their child's afternoons and weekends with playdates, piano, ballet, tap, hip hop, jazz, soccer, art, science, spanish, chess, baseball, girl scouts, drama and even lego building classes. Today there are classes for everything. I'm not saying that all the kids taking these classes don't want to be there, I know a ton that love their extracurricular activities, I also know some that are living their parents dream. This is most evident when I'm playing stagemom. Over the years I have met some wonderful parents who are allowing their kids to follow their dreams of modeling and acting, I have also met some parents (because there are stagedads out there) who are clearly making their kids live out their own unfulfilled destinies. I never need to explain myself, while I love watching K in action that last thing I ever want is to be right there next to her. I've had to audition with her on occasion and I usually enter the room kicking and screaming (in my head of course). She booked two commercials that way, in spite of me, not because of me :) There's a dad out there that has his kid work every day, this is possible by doing background work for movies, TV and commercials, if they are SAG they usually get a full day rate. This same dad has his child collect unemployment when the kid isn't working. I know that dad has been heard telling his kid "because I said so."

Recently K and one of her best buds N did a photo shoot for a photographer/magazine editor that both girls have worked with many times. At the shoot they asked if N's mom and I would help them out and let them photograph us for a mom fashion thing they were doing. HELL NO was our reaction, thankfully she feels the same way I do. Seriously I won't even go through yellow lights around here in fear of one of those red light tickets, and the fine of the ticket is secondary to the fear I have of the awful picture that will come along with it. We relented and while it wasn't exactly fun, it didn't suck. We were both self conscious but enjoyed the cheering we got from our professional model daughters. We even started imitating them posing like they do and demanding candy when we were done. At one point I said "why do I have to do this?" what did I hear back?