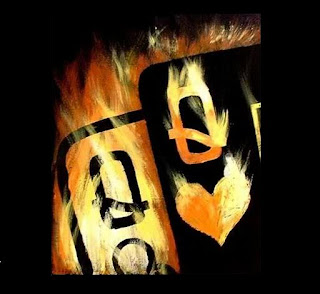 K has discovered Ace of Cakes, and it's all my fault. in an attempt to get things done I set the DVR to record her favorite show Cake Boss, to my horror she has already seen them all, I had no choice but to record all cake related shows, I had no idea there were so many!! Ace of Cakes is cool, same show different "colorful" boss. This show takes place in Baltimore, Maryland, and at the helm is a baseball hat wearing goatee'd bad boy named Duff. K likes Duff better than Cake Boss's Buddy because he doesn't yell and he seems like a big kid. His bakery is staffed by his cool friends who all seem to enjoy spending long hours and weekends at Charm City Cakes. I wouldn't mind hanging out there: making beautiful cakes, eating sushi and hanging with my friends all day. Where do I sign up? Duff are you reading this??

Watching these shows has added to our list of things to do in the kitchen (see Cake Bossy from last month) K spends a lot of time conceptualizing cake ideas. Watching these shows has made her an expert in baking. She doesn't understand how come Buddy and Duff can make a bunch of cakes in 30 minutes while it takes us hours. She is mad that we don't have copious amounts of fondant or a giant fondant rolling machine. She thinks we need one so the cake can get made faster. I suffered from questions today as I made a cake for her "Country" project presentation that she is doing tomorrow. Can I remind you that K is in first grade? Thanks.

A few weeks ago a letter was sent in her homework folder that all the kids were to chose a country and write a 10 page report (first grade pages, lots of coloring) and a special project. I usually do K's homework with her and begged D to do the report with her. He agreed and they worked all weekend. K's Italy report was really cute and all her, while D might have steered her in the right direction, everything on that paper came from her. For the project we thought a travel poster would be cool, one of those old Pam Am posters, but it really would be too much work for K and we'd end up doing it all, a thing we wanted to avoid. We decided on a collage of The Style of Italy, it would really only require some cutting and gluing and we'd finally have a use for all the magazines that seem to find their way to our home.

The poster was cute, pictures of pizza and pasta, wine, Italian couture, shoes, purses, jewelry, a private island castle (K's favorite) a vespa and a beautiful Maserati. It also had cute phrases we found that were all about style. Sure it was a little superficial but it was fun and K loves all those things (except wine of course). While I wanted this to be her project I started ripping out cool pictures, eventually I became obsessed with finding cool things for her poster. She tried to help, looking through W and Bazaar but trying to explain haute couture to a six year old who thinks high style is sweatpants and a tank top is a lesson in futility. In the end though we all sat around the table and glued pictures we all picked out in an orderly but "messy" fashion. I felt bad for not having her do it completely on her own but it was a lot of work. At first my big idea was a cake shaped liked Italy, she loved the idea until we both realized that it would be more my project than hers. I told K that I would make her a cake to share with her classmates after her presentation.

Monday morning D and I took K to school together and dropped off her project, when I saw some of the other kid's projects I knew I wasn't alone alone in the helping department just in the degree of the helping. Some of the posters had charts and graphs and lots and lots of writing, writing that didn't look like a first grader had done it. I felt better about our collage, my input as well as the content. K knows about clothing, cars and food, a poster with average climate details is something she would want no part of. She was bummed that she was going to have to wait until Wednesday to giver her presentation. That's when I decided I was going to make her an amazing cake.

I wanted to make a cool pink boot, that would be perfect, she loves boots and her favorite color is pink. That or the Italian flag, I couldn't decide. I went to the bakery supply store looking for inspiration and hopefully a boot or Italy shaped cake mold. They had neither. I thought that it might be easy for me to just cut out what I needed, I've seen enough cake shows, I can do this easily. I even laughed out loud in Gloria's Baking Supply at the thought of this, I sounded just like K! I bought a few things and a big white cake box: I learned this lesson early, traveling with unboxed baked goods is not a good thing.

I picked up K today and she told me about all the kids and the presentations they did, what they talked about but mainly what they brought, she loved the candy from the Mexican piñata and the Chinese fortune cookies. She was excited to make a cake and we decided on the flag, I think she decided because she knew that the boot would have been a nightmare (and she would have been right). We came home, she did her homework and then we went right to work. I only have one 9 X 13 cake pan so the baking took a little longer. When the cakes were cool we trimmed the top, just like we learned from Duff and Buddy, we put a nice marshmallow icing in between cakes, and dirty iced it with a vanilla frosting. We made our own marshmallow fondant in white and draped that around the cake. One of my genius purchases at the cake store was a small package of colored fondant, just in case we needed it. The white fondant took forever to mix and longer to roll out perfectly, I think I did this process five times before it stopped sticking. I cheated and rolled out a strip of green and red for the flag. It would have been impossible to make other colors, my kitchen was a mess and my patience was low. Even the pre-made fondant was difficult to work with, K at this point was over it and was now making a fondant cat for her teacher. I finished the cake photographed it and boxed it. I was really proud, it was beautiful. I was so happy K had this awesome cake to share with her class! It was perfect, a cake like the flag! Yeah, she was over it, all she really wanted was to sculpt the fondant, just like the girls on Cake Boss.

Seriously, she could care less about the cake, the idea was fun and the mixing was fun, that's about it. While I stressed out over sticky fondant, rolling and rolling until I got it right K was happily making shapes and playing with sugar. I would not stop until this cake was perfect.

Somehow this cake became more about the perfect presentations the other kids had done and less about doing something fun for K. While I loved her little hand written report and the picture she drew of herself on a Vespa in front of the Leaning Tower of Pisa, I wanted her to have something perfect too. I didn't want her to feel bad and think anything she did was inadequate. The funny thing is, she would never even think of that. She could care less if some parent copied charts and graphs, or typed out their kids report and used one of those plastic report covers. It was me, I didn't want her to think that I didn't care about her. She did complain about how much work she was doing but we made her push through and finish. She's 6, pushing though should mean eating the last of her broccoli so she can have ice cream.

So while D and I made her do her report we made sure she did it in way that was all her and she should be proud, just like we are. I am dealing with my issue of wanting to do do everything for her in my way. The cake was not part of the presentation it's just an added bonus.

So tomorrow when we open the box and everyone yells in excitement she'll be proud, proud of her report, proud of her cake and proud of her mom, who found a way to make it perfect and to keep it real.