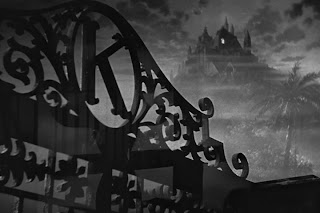 Today K wore a shirt that said in tiny letters "for little citizens of the world." I bought this for her years ago at one of those 75% off sales I enjoy so much. There's nothing I love more than ridiculously high end kids clothes bought for basically what the tax on the original price would have been.

She picked it out too, it matched her Valentine's Day sweatpants. I have to say, she did a good job, she even asked me for a "fancy" hairstyle, I always indulge her girlie requests. We were going shopping in Santa Monica and she was feeling "on" so she wanted to look nice for her "audience." She wanted to get a book I couldn't find at the recent school bookfair and I needed to pick up a copy of a magazine that had an ad with K in it. I figured Santa Monica would be fun, it was early enough that parking would be OK and between all the food options there we could probably find something that we both could agree on, at least I hoped. We found the magazine, K had no interest when she saw herself, she was more interested another one that came out a few months ago, a quarterly publication that had 6 full pages of K doing some of the most amazing fashion editorial. She flipped around it proudly and asked me to buy it for her. We already have a bunch of them I told her, she said it felt strange to have her pictures up on that store shelf. I told her that her friend N is in there too and they can keep each other company. I have to admit that I did think about it for a minute, but then I realized that I have so many of her pictures and magazines all over my house, I didn't need to spend a bunch of money to add to the mess. She has an interesting mind, I like to watch her thought process.

For lunch she wanted to have breakfast, I took her to my favorite place in Santa Monica, one I frequent often and the location for many a bitch session with A or my friend M (who is like the little sister I wish I had). K was specific in what she wanted which of course was not on the kids menu or the regular menu, after careful negotiation I think we were able to get what we both wanted without $25 for extra this and that. While we were waiting for our food K was drawing her new favorite book character Skippyjon Jones, she showed the waitress who had come by to bring me coffee (mmmmmm, coffee) her work and she was impressed, K is also an "artist" and is "planning to have her own gallery in a few years" she also told the waitress that "her house was already a gallery of her work and that she gives her mama at least two pictures a day." They started a conversation and talked for a while, I just sat there and watched my little girl shoot the shit with another chick about her plans for Spring Break, fashion, being an artist and her sleepover with her best friend J "if I'm really really good, like eating my food, good" she said. She's not a kid, she's a tiny adult, she told the waitress she was a citizen and read her the writing on her shirt. "I'm a little citizen, see?" she said pointing "but I really am, seriously!" OMG it was so cute.

She was right, she's not only a citizen but a productive member of society. She received a tax refund check from the State of California yesterday and paid her Federal income taxes a few weeks ago. She's already a union member, although that wasn't a choice, she had booked her 4th SAG job and was a must-join, a fact D and I find ridiculous. Sometimes when I pick her up from school she asks me what's on the schedule for later, when I tell her it's love and kisses she makes fun of me "really? what are we doing?" She's such a Type A kid. I check in with her often regarding her "career" making sure that she's doing it for her own enjoyment and not trying to appease me. After a tough driving day last week I asked her (probably for the millionth time) if this was still fun for her. I asked her if she likes auditioning because she thinks it makes me happy, my astute child answered with "Well you're the one that has to drive everywhere and sit around and I get to sleep in the car and then play with my friends, that makes me happy not you, do you like it?" Wow. I actually do like it, just not the horrific driving part of it.

Sometimes I worry that K might be missing out on something, but then I look at her and she is usually having a great time no matter what she's doing. She takes after school classes like her friends do, (Hip Hop, piano and will start karate soon) she has playdates and sleep-overs. We meet friends for various activities and she goes to a million birthday parties. Her "career" will sometimes take her out of school, (but only occasionally) when that happens she works with a set teacher and her real teacher is extremely cooperative. She isn't over-scheduled like some of the kids we know, sometimes she's even *gasp* bored! She loves to be the center of attention but sometimes she's so shy I wonder who is the kid hiding behind my leg. Sometimes this annoys me, then I realize she's a kid, she's acting exactly like she should. She doesn't have to be "on" all the time. Just because she has a SAG card doesn't mean she has to perform all the time. I need to be better at remembering this.

Last week at one of her auditions we saw (but mostly heard) a 10 year old stagebrat rattling off her extensive list of credits to anyone willing to listen. K sat with her for about a minute and then walked away finding a group of little girls playing on the floor. She came up to me a little later and told me that the girl didn't want to play, she wanted to talk about herself. I'm so glad that my 6 year old noticed this behavior and was put off by it. The moms I knew at that audition were all in agreement: If any of our kids started to sound like that their "career" will suddenly and without warning be over. K's friend N has a pretty extensive resume herself and never talks about it, K knows this and said something to the effect of "N is famous and doesn't talk like that loud girl, that's why N has so many friends."

So yes, my spirited young child is a little different than most of her friends but completely grounded and hopefully headed in the right direction. Our recent parent/teacher conference showed us that not only is she doing great but she's ahead of the curve. She's the same mostly loud but sometimes quiet girl at school that she is at home. She is in fact a little citizen of the world, a fact that she's extremely proud of, and she should be.

So for now I know that she isn't missing out on her "Rosebud." She does complain loudly and often that I won't let her have a television in her room or allow her to watch the shows that other kids get to watch. I have no problem with this. If she wants to go around yelling "Spongebob" it's because I'm a good parent, not because she missed out on great childhood moments.

Off to clean Xanadu.
Posted by MicheleB at 5:37 PM