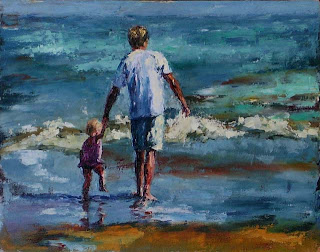 I decided to share this post from my dad's blog (I think the apple barely fell off our family tree), it gives a different perspective of my childhood (even though the story is the same). My dad and I have a completely different style but share the same tolerance for bullshit as well as a fondness for swearing.

In today's NY Post, an outraged judge sent a LI mom to jail for trying to drive a wedge between her ex-husband and their 2 daughters, keeping them apart for weeks at a time and even claiming he groped one of them. When her ex-husband was scheduled to visit the girls, she would deliberately plan trips to the theater or other last minute family outings. It goes on and on, but bottom line is this bitch was sentenced to 6 weekends in the slammer for this terrible behavior. (Ex-Wife from Hell -read the article/link}
Normally I would just laugh at something like this and say to myself that I am really happy. I can't do that. I really can't do that because I am still seething from reading this. My blood is boiling and I want to kill my ex-wife now more than I ever imagined. (Normally I only want to kill her a little, but now it is up really high). I have been so pissed today that I took my son to lunch at a local strip club to try and forget how pissed I was.
When I got divorced from wife # 1 (starter marriage), my 2 girls were pretty young. In fact they were around 6 and 8. I so looked forward to those weekend visits and tried to plan everything that was humanly possible considering I was making almost no money then, and most of that was going to alimony and child support. It didn't matter because loving them and looking forward to the weekends was worth everything. We would go on picnics, parks, cheap restaurants, museums, movies, and basically anything that was free or close to free. We spent lots of time in my apartment in the City, because there were always street fairs and plenty of places to walk. Despite the constant downer of taking them back on Sunday evening, it was pretty good..........Until my ex got re-married. Her new husband, Adolph Hitler (who I never met, but was ready to murder), managed to completely make things a living hell for them. In fact, my daughter wrote a wonderful blog explaining all of that in detail, which was even new to me.........Then it sort of began....I would go to pick the girls up on a Saturday and my ex would tell me on the intercom some excuse of many. Either they had to visit someone, they did not want to see me, they were at one of her relatives and on and on. I would call and she would not let me speak to them either saying they did not want to speak or they were doing homework, or not there, or some other lame excuse. But anyway, the days became weeks, the weeks months, and before I knew it years had passed without seeing them.
I got a lawyer and took the case to a judge, who ruled against me for whatever reason. All that remained was sending cards on a regular basis and trying to call. But then, out of the blue, my daughter M called me from the hospital where she was having her tonsils removed. That was wonderful, but I later found out she got in trouble for getting out of bed. There were a few secret phone calls after that. In fact I had to sneak into her public school graduation, because I was not allowed to see them. Eventually all of that ended and I built a great relationship back with my oldest daughter. It is funny how you remember only certain things about the past.
I never really gave any of this much thought as I got older. I certainly do feel the pain that was caused to the girls, especially due to the fact they were the ones who suffered the most. They were young and I am sure found the entire situation hard to deal with. They had to live with this asshole who I guess was really terrible. They had to endure the ignorance of their mother who let all this happen. I have moved forward all these years and never really thought about the cause and effect of all of this crap...........................Until Today..............Now the anger for my ex-fucken wife is at 100%.......I am able to close my eyes now and picture her spending 6 weekends in prison, even now.
Posted by MicheleB at 9:07 AM