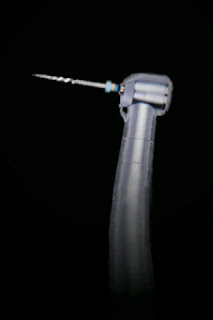 So I had to go back to the dentist today for the work I talked about here. Of course I made the appointment the same day that K was supposed to get a "Student of the Month" award and I couldn't cancel, they give me too much shit for that. Luckily the assembly started at 8:25AM and my appointment started at 9:30AM, I called them yesterday to tell them I'd be late and why, how could they have a problem with that? They didn't, the receptionist (who is more like a dental hitman) told me not to worry about being tardy and even called me on my cell this morning to let me know that the dentist was running late and I should take my time. I was relieved and didn't have to rush, I was also freaked out, it meant he had blocked a few hours for me and I would be there forever. Crap.

I was a little uptight this morning, knowing what my day was going to bring but seeing K's happy face during the assembly made my morning. She even ran up and kissed me goodbye and told me to be brave, I promised her I would be. I didn't even linger at the school to avoid the inevitable, I made it to the office on time and before my dentist. I asked the assistant how long she thought it would take today and she said "not long" but I didn't believe her, if the chair had restraints she might have told me the truth. Before he could even start she had to take impressions, anyone who has ever gone through that knows how awful it is. Not only did she have to take them of the lower right (where the work was being done) but because my bite is not the greatest she had to take a full upper as well. Good thing I'm not a breakfast girl. Yuk!!

After that pleasant experience the dentist was ready to give me about 50 shots of Novocaine, he wanted to make sure I didn't feel a thing. I reiterated to him that my dental issues had nothing to do with pain, regardless, he thought it would help me. It wasn't bad, the shots hurt a little and soon I couldn't feel a thing. He told me to close my eyes and relax. yeah right, not only was that impossible but the classical music that had been playing had been replaced with love songs by Madonna. That was the real torture.

When I go to these appointments I just have him tell me what needs to be done, I do not need a step by step analysis, today it was a long one, I don't know exactly what was done but it involved lots of drilling (!). Thankfully he gave me a few breaks. Holding my mouth open for that long without yelling at someone is not something I'm used to doing. Anyway, after what seemed like hours he was done. He put on a temp until next Thursday and told me to be careful when chewing on the right side. Uh, no problem, after listening for hours to whatever he did I didn't think I would ever be able to eat again. I took off quickly, I needed to get home and change before I went to pick K up from school, I had that dentist office smell on my clothes and needed them off immediately.

By the time we got home the Novocaine was just wearing off, suddenly I felt like I was hit in the face by a hammer. I just retreated to the couch while K watched Food Network, that's when the headache started and I realized I had not eaten anything all day, that sucks. I was not able to take anything on an empty stomach and I had nothing in my house that I could eat. I called D, thankfully he wasn't going to be late, he stopped off at the store to pick up dinner and some soup for me. I felt better after eating and was able to take some meds, did I write that I am allergic to aspirin and ibuprofen? Yeah, sucks to be me when you don't feel great. I still had some Tylenol with codeine left over from a surgery I had a few months ago. It worked like a charm and I was able to finally rid myself of the awful mouth and head pain.

Dealing with this around every six months is not fun, and there's nothing I can do about it, genetically I lost that lottery. Just by going and enduring it all assures that it won't get worse for me. That doesn't make it any better though.

At least after next Thursday I get a few months off.

ouch
Posted by MicheleB at 9:26 PM