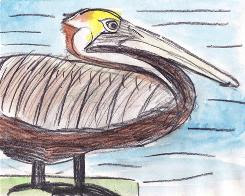 The picture above is a brown pelican drawn by Olivia Bouler, an aspiring ornithologist who's raising money for birds hurt by the BP oil spill, so far she's raised $70,000. Oh yeah, she's 11 years old. With all the blaming going on right now in the Gulf it seems like little is being done by BP or the government. There are a ton of animal rescue volunteers trying to help but apparently access to certain areas is hard to come by. I've also heard about dead animals being removed quickly before they are spotted and photographed. BP has been lying about the amount of oil they have allowed to spill into our water and their "what if" plan is useless and was written by a dead guy.

Through all this the only thing to come out of this has been anger, frustration and blame. I have not heard one positive thing during the 56 days of this environmental tragedy.

Please read the following story that appeared in USA Today about an angel named Olivia:

Americans nationwide feel helpless when it comes to aiding the birds smothered in oil from the Deepwater Horizon oil spill.

A fifth-grader from Long Island, N.Y., Olivia has raised more than $70,000 for the National Audubon Society— a non-profit dedicated to bird conservation — by drawing pictures of birds and sending them to people in the USA and abroad in return for a donation.

Olivia has visited the Gulf of Mexico several times, where she has enjoyed fishing and feeding dolphins with her grandfather. After the oil rig explosion, her grandparents in Orange Beach, Ala., called one night and explained how the wildlife are struggling to survive.

Olivia says she "sobbed uncontrollably." But rather than continue to cry, she ran to her room for markers and paper and wrote a letter to the Audubon Society. "It said: 'I want to help, and I want to make a difference and show that the birds are important, and we need to preserve them,' " Olivia says.

The organization liked the drawing of a cardinal Olivia included in the letter and suggested she draw pictures of birds in exchange for donations. Olivia, who aspires to be an ornithologist (a person who studies birds), agreed.

Since she started in mid-May, Olivia has drawn and painted 150 original pieces. People have requested various species, such as the brown pelican, heron and blue jay. Donations have ranged from $10 to $250.

AOL also got wind of her Save the Gulf campaign and offered to help by donating $25,000 and posting Olivia's artwork on its homepage.

After CNN, BBC and The Huffington Post featured her story, requests for drawings flooded in. "My hands were sore by the end of the day," Olivia says.

Her parents spend five hours a day mailing artwork, e-mailing donors and managing the Facebook page that has more than 11,000 fans.

Olivia's mother, Nadine Bouler, a teacher, says her daughter has proved that you really can do anything.

"I've always told students you can make a difference, and I pretty much believed it," she says. "But now I know it is truly possible."

Drawing is time-consuming, however, and Bouler says she wants her daughter to continue with her saxophone playing and to be able to participate in end-of-the-school-year parties.

As a result, Olivia has been limited to 500 requests for artwork, which have all been filled. Subsequent donors will receive a printed copy of an original piece.

The donations are being used to clean oil-coated birds, transfer them to Florida to be released in safer environments and cover food and motel expenses for volunteers, says National Audubon Society president Frank Gill.

Gill says volunteers have found more than 800 dead birds — most of them pelicans — that have washed up on the Gulf shores. About 200 birds have been found alive. Pelican offspring are in serious trouble because they need to be fed four times a day, but the parents can't catch fish in oily waters, Gill says.

With no signs of the spill stopping, Olivia plans to continue drawing. She says the spill is a "depressing tragedy."

"BP made a huge mistake. ... I want to make up for that mistake," she says. "I want to save those birds that are dying."
Posted by MicheleB at 8:07 PM