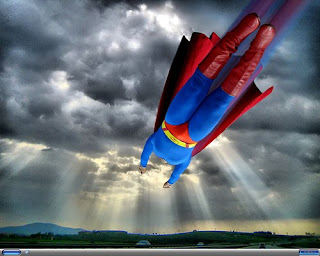 I coined that phrase today at Dr. Phil's. We were talking about the anger I tend to exhibit after certain sessions, like the ones where I am told to take the high road regarding my MIL. I get it, I know what I need to do, I do it all the time, I just don't have to like it. It's the same kind of anger I get while watching the news and seeing BP's head asshole Tony Hayward tell the world he wants his life back. He is partially responsible for 11 people who lost their lives, for polluting the ocean, for killing ecosystems and the list goes on and will continue to go on until his company does something about it. What will be the fallout from this? Besides the death and destruction? Probably nothing. A fine maybe? Even a huge fine isn't enough. This company should be shut down and all those involved in ignoring safety measures should be tried for murder, all profits should be put back into the businesses that will have to close.

This is the stuff that gets me angry, when crimes and actions go unpunished. I cannot watch the news anymore for this reason, priests are molesting children and the Vatican covers it up, these are CRIMES and they go unpunished every single day. Politicians are lying and committing treason (a crime) and nothing is done. Sometimes I feel like I'm screaming and nothing is coming out. It's infuriating and I cannot stand it. When it happens in my own house I do something about it. I understand that my MIL will never change, I understand that if she wants to spend the rest of her life in complete denial about who and what she is that's her business, the only thing I can do is not reward that behavior with family visits. The other thing I can do is make sure she knows why. She cannot simply blame what is happening in our family on her bitch of a daughter-in-law, I mean she can do this to her friends but that doesn't bother me. I want her to know why this is going on, she can refuse to acknowledge her own behavior but she needs to know that she isn't fooling us.

I know this confrontation is going to be difficult for D, I would do it for him if I could (I don't think I would be as effective or nice about it though). I just need to see her receive some sort of "punishment." I've taken so much crap from her already and although I know it's childish and immature I want her to know what it feels like. We talked about injustice yesterday and I brought up karma, yes I believe the life (or lack of) my MIL has created for herself has some sort karmic value, but in order to go on I need her to know she's only fooling herself by denying her reality. Dr. Phil asked what happens if she doesn't change (she won't) and I repeated once again that I just need this out there. I need to have some sort of balance in this situation. I will no longer keep quiet when she makes one of her awful comments or plans a family reunion when she knows I won't be there (yes, she really did this). I'm not as nice as D, my responses will be quick and cutting, I think she needs to know that they will be coming.

I talked about being an emotional superhero because things like the BP spill, the Vatican abuse scandal, the wars we continue to fight, the ban on same sex marriage, the teabaggers, Sister Sarah, Rush, Glenn and the rest of the big mouthed idiots get me so angry. I feel a violent reaction in my body when I think of these things, I want to fly down to the Gulf and stop the leak myself. Surely my will alone is strong enough? I feel powerless, ineffective and weak when I think of how little I can do about the things that make me so angry. I have no choice but to become emotional over them. What am I supposed to do with these feelings? How can I see pictures of the Gulf and not react? Who can do that? I try to avoid talking about it or watching the news but I can't. It's everywhere. I need to see some sort of action to quell these feelings, if it can't be done with the current plagues of our world then it has to be done with the issues in my house. I cannot attach my cape, fly around the Earth at incredible speeds to create a force making time run backwards until all the oil is back where it belongs and the 11 people that were killed are alive again. I can only help my husband compile a list of past grievances and offenses to bring up to his mother. I can support him and give him the strength he needs to get this done effectively. I can try to not want to beat the crap out of her if she does anything egregious to me again. I can do all of these things.

I am M, an emotional superhero.

Wanna join my team?
Posted by MicheleB at 9:36 PM