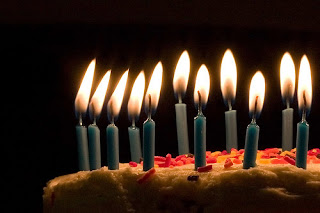 I'm not big on birthdays, that's not true actually, I like other people's birthdays. Mine is not that important to me, it seems foolish to make a big deal about something you had nothing to do with, at least that's the way I see it. I do understand celebrating with other people though. So today was mine, not a big deal to me but to my child it was huge and that was adorable. She woke up super early and pulled D out of bed, together they made me breakfast in bed which we all ate together. It was lovely, her happy face in the morning is really inspiring, especially when she gets to help open presents. She gets excited over anything relating to birthdays and I was happy to let her.

After they left I was kind of sad, when the school nurse called 30 minutes later saying K was complaining about burning eyes I was halfway out the door to get her. She was calling to make sure that K didn't have pinkeye, instead of saying she might I told her the truth: she was in the pool all weekend and lately she gets a little itchy (K's word) when she has eggs, which she made me for breakfast. "Should I come get her?" I asked. "No, she's fine, we're just making sure." Waaaaa. I wanted her to be home with me. Instead of giggling with my daughter I slowly got myself ready for the day. I was going to go to a local day spa but scrapped that just in case the school called again and K wanted to come home. I remember that feeling of wanting to come home from school and then the school never being able to reach my mother. Instead I took a ride to visit the brand new TJ Maxx that opened in Santa Monica, it was a shoppers dream. Seriously if you know labels there are incredible deals there. I bought two dresses, I wanted to wear something new to dinner, besides they were cute and it was my birthday. Double justification.

I got to school early as usual and was surprised to see my husband walking up to my car a few minutes before dismissal, he left early to spend the rest of the day with me. Of course when K saw us both she opted to go home with daddy, I wasn't surprised she always comes home with me. As I turned the corner passed D's car he told me he had to pick up something at a friends house on the way home. I figured I'd be about 10 minutes ahead of them and I took my time coming home. After about 20 minutes I sent D a text: uh hello? He called immediately, apparently he and K had a few other things to do. I felt bad complaining when they were trying to do something nice for me but I was tired of being alone. I missed them. They finally came home with gorgeous flowers and a little red velvet cake for me. Yum, thankfully all diet rules are suspended on your birthday.

We tore through the cake and hurried K to to change into her karate gear. I'm glad D got to go with me, Saturday's karate class is so crowded he never gets to really see what goes on in the dojo. He doesn't get to see how it's like a second home to the kids and moms (and nannies and dads) how we all tend to stay long after our kids are done with their class. He got to see that today when we lingered a bit after class talking to D in the office about the weekend and our plans for dinner. Later in car he asked me where I met D, I told him when K started karate. He thought we had known each other longer, I told him that's why we love karate, it's so much more than an activity that K does a few times a week, it truly is a second home.

We got home and changed quickly, we were having dinner at Luna Park a restaurant I have passed a million times but never stepped foot inside, a few weeks ago K and I were watching "The Best Thing I ever Ate" (again) and Sandra Lee said the s'mores were amazing. We watched as she made her own s'mores at the table and we were jealous, I told K that we should go there on my birthday and she agreed. So we did. We went there because of s'mores but I have to say that we had one the best meals ever. The cioppino I ordered was superb, D's pot roast was unbeatable and K's mac and cheese with ham wasn't just great it was super great. The s'mores however, were heavenly. We decided right there to make it a family birthday tradition. It was that good.

Overall it was a great birthday. The coolest gift I got? A leather bound copy of the first three months of this blog. I had no idea that while I was writing the random thoughts in my head I was writing a book. It's beautiful too, my very own coffee table book! I better go out and buy a coffee table now.

I am supremely happy.

See, wishes do come true.
Posted by MicheleB at 9:31 PM