Give me an A 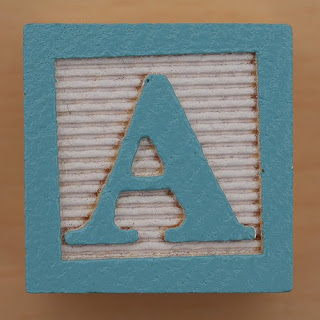 I never was one to stress over grades, I did the work and was rewarded for it. I knew what expectations my parents had for me (don't fail so we have to deal with it) and I never disappointed them. I always tell K to do her best, in school and in life. In school it's a challenge sometimes, she likes to be like her friends. Last year during our first parent/teacher conference K's teacher Mrs. G gave us a glowing report, she was doing really well. She told us by the end of the year K would be able to read a list of sight words. D and I looked at each other curiously, K already knew all her sight words and more. Mrs. G just smiled and took out a little notebook, she said that there were a few students in class this year who hadn't let on about their tricks. She said that it's normal for kids to keep accomplishments to themselves especially if their friends weren't at the same level.

I was happy Mrs. G knew this about K but a little shocked that our daughter could succumb to this behavior. When K was old enough to hold her own head up I was right there shoving flashcards in her face. I read everything to her: street signs, magazines, food labels in the supermarket, if it had words she heard it. When I diapered her I told her exactly what I was doing at each step. When we were driving I told her where we were going and who we were meeting. Once during a food shopping excursion when she was about 6 months I was doing my usual thing, letting her know what I was getting and how I was going to cook it. I did this all the time, anyway, a woman passed by and asked me if I thought my baby knew what I was saying. I replied that I always tell her what I'm doing regardless of what she is capable of understanding, she looked at me like I was nuts and walked away. She didn't get too far, another woman came up next to us and said that she was a child psychologist and told us there's proof that constant talking and explaining to babies was extremely helpful in their development. She told me that I giving a huge gift to my child and I should just keep doing what I'm doing. I thanked her and we chatted for a bit, the other woman just looked at both of us and shook her head.

I never stopped reading and talking to K. One day my friend A and I were in Ross with our daughters who were about 18 months or so, K was calling out letters and A asked her what she was saying, K pointed to a sign and read each letter "r..e..s..t..r..o..o..m..s" I had one of those stupid "My kid rules!" look on my face. It was cool to have this with A, she knew all about my relentless pursuit of baby perfection. I had books like "How To Teach Your Baby To Read"
and about ten different sets of flashcards. I had her counting and spelling before preschool, most likely the reason she was so bored there, sorry K!!

I remember last year during Kindergarten orientation Mrs. G told all the parents exactly what our kids will know by Winter Break, D and I slyly glanced at each other, K already knew all that. Her report cards reflected that as well, all the worries we had about placing her in kindergarten early were gone. We were a little nervous when first grade started but again, K did well. She had more obstacles to overcome this year, the biggest was a bully who threatened K with "telling the principal" if K wasn't nice to her. This didn't last very long. K's emotional growth this year was on par with her academic achievements.

She was nervous about her final report card even though she knows that the grades were secondary to her effort in the classroom. LAUSD doesn't give letter grades only 1 - 4, with 1 being not proficient and 4 for advanced. My little worried overachiever brought home a perfect report card. When I opened it I feigned surprise and asked her in my stern mommy voice "what is this??" She looked up at me eyes wide and filling with tears "what Mama, what?" When I showed her the line of straight 4s she got mad at me for scaring her. When I asked why she was scared she told me that she was afraid of getting 2s and 3s because she knows she did her best and she knows that she's smart. She doesn't have to worry about how far up I set the bar, the one she set for herself is already pretty high.

Am I happy that she got all 4s? Of course, she deserves it. Would I be mad if she didn't? No, I knew she did her best, I'm just happy that her best is truly remarkable.

Congrats to my now second grader!!
Posted by MicheleB at 10:25 PM