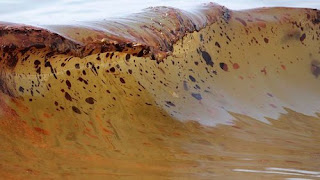 I don't know how much longer I can look at these images of the Gulf without losing my mind! I can't listen to BS either. Reminds me of a Facebook status I had last week: BP is the new BS. The blame game is getting out of hand and the only sure outcome is more oil coming out of BP's giant hole in the ground. More beaches ruined, more water polluted and more wildlife destroyed. BP execs show no remorse. They never had a plan in case of an accident. They only knew they had a huge opportunity to make money and that's what they did.

This whole thing reminds me of my MIL, maybe because they both piss me off. It's most likely due to our appointment with Dr. Phil today. I didn't go last week and was kind of glad. I welcome the relief. I get sick of talking about her, just like I don't like talking about BP. They are both responsible for their actions but refuse to take responsibility for them. Very different yet exactly the same. It's merely another form of injustice and you know how I feel about that.

So once the session started I knew it was going to be one of those days: Why do I need D to confront her? What do I expect to change? Do I see similarities in her behavior and mine? The answers: Because he has to, nothing and oh hell no (I actually said much worse). I understand what Dr. Phil is trying to do, diffuse my anger and lessen it's effect. I've done that, I don't feel angry anymore, just pity. When I was asked if there was something a little condescending about that I said no, and I mean it but really who cares? Who cares if I feel above the pathetic way my MIL does things? I can tell you right now, it's not likely that I'll ever be as evolved as Ghandi but I think I've done a pretty job thus far. If I feel pity when anger used to live so be it. Dr. Phil should be happy I made it that far. Is it really necessary to make my husband confront his mother? I think so, just as BP execs were forced to meet with Obama. Is it anything more than a PR move? Maybe but who cares, it made a lot of people happy just as D's confrontation will make me happy. Will her response be as pathetic as BP's? Probably but we'll never have to spend another minute knowing that what she did never happened like she likes to believe.

I wish the oil spill could just be like that. Once it's all out on the open that they were responsible they could go on to fix it. Honestly that will never happen, in the Gulf or my family. Why is it when faced with the confrontation of actions some of us turn into 5 year olds? Constant denial will never take it away. I never understood that. I fully understand wishing that things could be different but the whole arms crossed head shaking thing is ridiculous. Don't they call that the OJ defense? Deny, deny, deny. Nope.

Not in my house.

Not in anyone's house, including the White House. Getting 20 billion from BP is a good start, sure it's not even close to what's going to have to be paid out but it's something. It says that they know it's their fault, regardless if those words ever come out of the mouth of that moron Tony Hayward. If they won't admit to any wrong doing, like not spending 500K to make a fix that would have avoided this whole thing, the least they can do is compensate the losses. Does it excuse or forgive? No, it gets them where it hurts the most.

That's better than nothing.