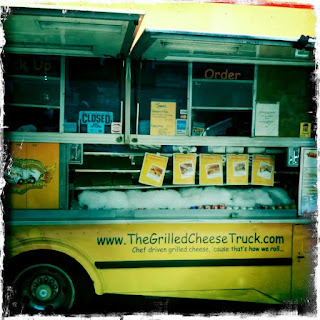 I miss bread. I really do. I understand that giving up certain food forever is difficult and sometimes you just have to say what the fuck (yeah, I just quoted "Risky Business," so what?). Today was one of those days. I hear about The Grilled Cheese Truck a few months ago and have been following them on Facebook. I've driven by it a few times only to find huge lines, which would be fine if I had time to wait but I don't think calling K's school with a "cheese emergency" would fly.

Earlier in the week I checked TGCT website for the week's locations (just in case) and I was thrilled to see that they were going to be melting (TGCT speak) right across from D's office on Thursday at 11:30AM. Perfect. I had a dentist appointment at 9AM and could come right after unless it took to long and even then, I was going to finally meet the famous GCT. We made a lunch date and I counted the hours. Then my dentist canceled and I was thrilled, I wouldn't have to worry about time, I would have to put up with this stupid temp thing in my mouth but for the sake of cheese I'll suffer.

In the morning I had an errand to do and then I headed east to D's office. They way I saw it we would have to be at the truck a little after 11AM so we wouldn't have to wait. I got to D in record time, we chilled in his office for a bit, went to get cash and then walked over to the truck's location. D's office is on Wilshire, smack in the middle of the Miracle Mile, the place for food trucks. In fact these trucks are so popular local (but crappy) restaurants are being forced to shut down. We arrived at the location and were thrilled to see we were the only ones there. We looked at the menu and waited for them to turn around the "closed" sign. A few people had shown up and started the lineup. When the little window slid open we sauntered up to the truck and ordered, giddy with excitement and hungry for cheesy goodness. I was so excited I posted relentlessly on Facebook letting all my friends know that I had not only finally met TGCT but I was first to order!! I got the daily special: pastrami, Havarti, grilled onions and spicy mustard on rosemary potato bread. D got their most famous melt: macaroni and cheese with sharp cheddar, bbq pork and caramelized onions. We split an order of tots and a side of pickles. Oh yeah, we also ordered plain and simple melt with Gruyere.

We took our bounty around the corner where an ESPN truck had parked and was showing the World Cup on a giant screen. The nice people of the building that let the truck park were handing out blankets so we could sit on the grass and watch comfortably. Our picnic was perfect, the sandwiches were incredible. So good in fact that we barely said a word and just sat there eating with giant smiles on our cheese filled faces. I ate so much I couldn't move. Like I said, I don't normally eat bread so when I do it's with a vengeance. I thought about even going back for more but I honestly could not move. I was full, happy and satisfied. Feelings that usually come from a $200 dinner, not a "roach coach" a term I will never say again.

It's silly to obsess over food, especially when it comes from a truck that I stalk weekly but this was incredible. All these trucks are. Now that the summer is here and K is home with me I think we'll be venturing all over town trying out new ones. The Korean BBQ taco trucks are supposed to be amazing. I have a feeling by the end of the summer K and I will be an expert on Mobile Food.

Our first stop on
Posted by MicheleB at 9:34 PM