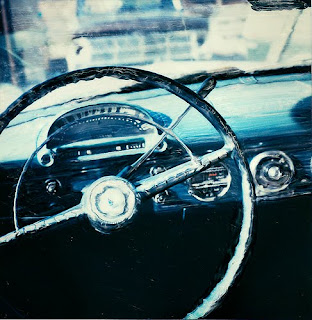 OK, I really thought I was trying to be better about my issues with the roads of Los Angeles. I've been leaving early, taking maps, water and snacks for K, anything that eliminates the angst I get when our commute goes wrong. Today the only thing that could have helped me was a helicopter but given my fear of heights and enclosed places that wasn't an option even if one magically presented itself to me. All I could do was sit and wait. K had a 4:00PM photoshoot for our favorite designer in Laguna Beach, a ride that should have taken a little over an hour. We left with plenty of time. I got some cash at the ATM and filled up the car and was on the 10 freeway by 2:00PM. I figured we could get there early and scope out a place for dinner, the 10 was a breeze and we got to the 405 in record time, even that seemed light. Sweet, things were going well, better than well and then all of a sudden we drove into a see of red lights. Traffic slowed to a speed my speedometer didn't even register. I saw my GPS slowly change my arrival time: 3:10....3:12....3:15......3:30. The longer we sat there the later we were going to be. I called D for advice but there was nothing he could stay. I needed to stay on the 405. I could feel my blood pressure rise as I watched the estimated time of arrival rise and rise. I was irate when morons kept cutting in front of me for no reason. We weren't moving!!! I frantically looked on my phone's GPS for an alternate route (don't worry, when I say we weren't moving I mean it, I could have put my car in park)there really was no way around this traffic. I yelled and screamed for a minute and then looked at myself in the rear view mirror. So we were late, who cares? Most shoots we sit around and wait for hours, at least it was cool in the car and I was with my favorite gal pal. I relaxed. Finally after about an hour we crawled passed an accident that had been taken to the shoulder. Minutes later the road opened to a manageable speed. OK, we might just make it and on time. I started to feel better when the sea of red lights reappeared. I just laughed. Even K made a joke about it, she knew she was the only model and said that at least they couldn't start without her. I called the designer and told her we were stuck but on our way, sadly we weren't even halfway there!

K and I swapped stories, talked about what we wanted to do this summer and told each other jokes. I have no idea how long this delay took but once again it was another accident, this one didn't look as bad. Again we had a sort of open road ahead of us. Too bad it was now after 4:00PM and we were officially late. We drove the rest of the way uninterrupted by accidents and made it to the photographers house closer to 5:00PM than 4:00PM. They were happy when we arrived, more worried that we would want to just turn around and go home. This is a job that we do for the clothing, beautiful and expensive clothing, and for the designer whom we both adore.

It felt good to get out of the car, almost 3 hours without a break is crazy, K ran out of the car and into the arms of her favorite designer who offered up many apologies for having us endure such a horrible ride. Honestly it wasn't bad. It was all in the attitude, once I relaxed it made no difference to me. I got over the being late thing because I had no choice. I was extremely fortunate that I left early though, the traffic would have been worse. They took K dressed her and did something cute to her hair. Then we were off to Crystal Cove and we had to drive. I was spared that responsibility though, feeling my pain we all piled into A, the designer's huge truck. I relaxed on my booster seat insistence for a couple of reasons. I certainly did not want to drive again and I can't remove K's booster, I put it in wrong and it will be in there forever. Besides she's 6 and legally it was OK, we were all kind of squished together so I felt OK (and the location was close).

The park and the beach were beautiful, being surrounded by such beauty has a calming effect that was felt immediately. I stayed close and the girls (photographer, designer and stylist) did their thing. I watched and only had to direct K a few times. Mostly I just relaxed, that felt great. On a break K took off to follow what she thought was a squirrel (and what I hoped wasn't something else) it turned out to be a Roadrunner, I honestly had never seen anything like it before, except the cartoon of course. It was amazing to watch and K was fascinated!

The shoot was done, they were happy and got what was needed, A promised to send K a huge box of new clothes along with a CD of the photos. We said our goodbyes and went off in search of dinner. The town of Laguna is beautiful but we couldn't quite find a place to eat, we found a bunch of restaurants but not what we wanted. I decided to just get on the freeway and find something. We drove for a bit and then I saw a huge mall I used to frequent when visiting friends in the area. I got off the 405 and parked in what I thought was the mall. It wasn't, it was a whole movie theater complex, full of discount stores and eateries. I told K that the first one we pass wins, except Subway, I can't eat there. We walked out of the structure into Karl Strauss. It was perfect, it would have been more perfect if I could have some wine but I could wait. The food was awesome. Instead of drinking I carb loaded with a giant plat for pork filled mac and cheese. It was wonderful. K sat on my lap and we stuffed our faces and laughed at each other.

We made it home in record time. No kidding, I think I even beat the GPS estimated time. I shut it off when I knew where I was going. I am also grateful that the average speed at night is over 80.

Driving Miss Crazy? Hopefully this series is over!!
Posted by MicheleB at 11:48 PM