Ain't that the tooth! 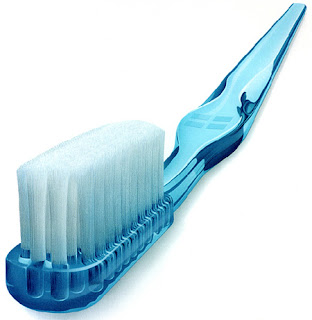 I can't believe I forgot about this!! I have another huge fear but not for the reason you think. I absolutely hate the dentist. I must have brought this up before, I'm too lazy to go back now though. I guess it's fitting I went today, even though this appointment was made a while ago it goes with my cleaning house and conquering all (or most) fears. It's not a specific thing and I have no problem with pain, it's so deep rooted (ha ha ha) I don't even know if I can explain it accurately. There are a few stories: Once, when I was a kid before I could get my braces put on I needed to have a few teeth pulled, apparently I had too many, I was put under but woke up too early (I guess) all I knew was the guy was practically on top of me pulling the thing out and blood was all over the place. Granted this is an old memory so the blood amount is probably normal but nothing I wanted to see. Then after I had my braces on for years the orthodontist wouldn't take them off until he was paid. Basically I had them on too long, and during this time I was never taken to the dentist so when the braces finally came off my mouth was a mess.

The following summer my dad took me to his dentist who immediately went to work, he told me constantly how I need to take care of myself. It wasn't a shame thing it was a more of a "I'm not worthy of care" thing. In fact I remember sitting in this guys chair when he asked me who my ortho was, when I told him, he flipped. Not only did he know him but he already had some beef with him. The next appointment I had the dentist told me that he practically had a fistfight with the ortho over his lack of care. Hmmm, I kinda wish he would have run into my mother and Evil Stepfather. Anyway he fixed a lot of what was damaged and sent me on my way.

Every so often I would go for a check up but old feelings of inadequacy would always surface, this turned into a deep rooted (can't help that one!) fear. Fear of going back to those feelings of neglect. It was never a pain thing. Recently, at D's insistence I started going again. Actually I went when I was pregnant, again at D's insistence, I needed to have some emergency work done and I insisted it be done without pain killers. They were so nice and I received no lecture, I'm sure they thought the lack of meds was punishment enough. I promised to go back for a full check up and x-rays after I had my baby. Yeah right. I couldn't get out of there fast enough.

Of course when it came time for K to get her first dental check up, I got a referral from our pediatrician and took her right away. She loves her dentist and always draws her pictures, in fact she asks all the time when she "gets" to go back. I don't want her to realize how deep my problem is so when D insisted I relented. The cleaning wasn't so bad, it was the exam after that made me feel like a ten year old. I remember walking to my car in tears. For some reason I went back, I knew it was the right thing. He had to send me to a root canal specialist and I went, got the thing done with no problem. When the file was sent back to my dentist I saw that he had written "great patient" on it. If only he knew! Anyway after that it was determined that I should have all four wisdom teeth removed. This was going to be a problem, in order to actually go through with this I would have to do all four at the same time, if not I know that I would do half and never go back. I also refused to be knocked out, having issues with that (of course I do). My dentist sent me to the guy that took out his wisdom teeth, he was going to set me straight. I'll show him, I brought K! He was awesome, he told me he wouldn't take out all four without anesthesia and he wanted to do them all at once. For some reason I trusted this guy. On the day of the surgery I was not the least bit nervous and it was easy. I felt nothing. The next day I looked awful but felt OK. I was more than a little proud of myself. I had to wait a few months to heal before I went back, and I welcomed the relief.

Well back to today, he told me what the next "project" would be and gave me my options, instead of going home and thinking about it (which really means putting it off) I made the decision and booked the appointments. I am going to finish this. It may take some time as we are working with our insurance and my comfort level but it will get done!

No drooling, uh, I mean fooling!
Posted by MicheleB at 5:39 PM