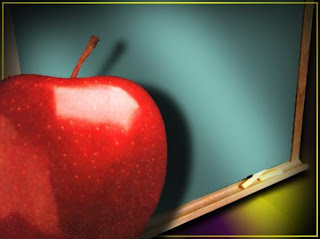 Today was the Open House at K's school. It was a casual thing, in fact if K hadn't said anything I probably would never have known. I dropped her off at school this morning and asked her teacher about it, she was surprised that I hadn't heard about it. Apparently it was in the school newspaper which we receive online and often gets deleted. Oops. I usually read it for about a minute and then hit delete. Glad I inquired, it was fun. D had to work, they are almost done with the movie he's been working on lately, the producers are leaving for Cannes on Saturday. So it was just the girls at school tonight, K proudly showed me around the room stopping at her little desk. Laid out on top was a report on America she had done in class, it was so cute seeing all of her work. I was handed a folder of various writing and weekly tests, I was impressed, she's doing really well. The difference from September to May is astounding, not only in her school work but in everything about her.

I was handed a giant folder to take with me, adding to the mounting stack of papers that have already found it's way to our home this year. As you can guess, I am that mom, the one that keeps everything, every spelling test, every drawing and every skill assessment test. I keep it all. At the end of the year I will go through it all, throw out what isn't worth keeping (to me, I know some moms that chuck it all) and sort out the rest. Some of the stuff I keep for me and K, and the rest we send off to family, if they want to throw it away cool, just don't tell me.

It was a nice moment having K share her day to day with me, she even remembered to offer me some water, something her teacher suggested in class. While we were looking at some artwork she stopped to show me the computer math program they use. I wasn't sure what she was doing when she opened the program. There were 10 spaces and she seemed to be filling them in randomly by clicking on various images and symbols. When she was done the program started and when I asked her what she was doing she told me she was putting in her password. Huh? Her password was a string of 10 characters how the hell did she remember that? "It's from last year" she said. What? Her teacher then went on to tell me that she remembered her long password from Kindergarten. Wow. I have a problem remembering my four number passwords. She breezed through the math with a speed usually reserved for online sample sales.

I can't believe this school year is almost over. I remember walking her into the classroom on the the first day of school, her first day as a "grader." She was so small, how could she be in first grade? She is also the youngest kid in the grade which gave me further cause for concern. A few weeks into the school year and I was back to normal, she was doing great. Her interest in reading and writing took off as well as her competency in both subjects. Looking at her early journal entries and the adorable way she tried to spell made me miss my little girl, although she hasn't packed up to leave for college, she has grown by leaps and bounds. Her current journal entries are perfectly spelled and written, and a far cry from the very first one that went along with a stick figure drawing of K with her dad in a pool:

She now writes and draws with such detail I wouldn't be surprised to be reading her blog this summer. In fact I think that may be a great summer project for us, I'll keep you posted on that.

After we were finished with the Open House, I told K we could go out to eat, it was already dinnertime and I wasn't about to go home and cook. We ran into her friend E who had just arrived with her family, she told K that they were having dinner up the street at one of our favorite Mexican places. I knew where we were now going, I told her that we weren't going to stay all night, we were already leaving the school and they had just arrived. She understood this and we made our way out.

We were seated at a table in the middle of the restaurant which gave K a view of the whole place including the door which she watched fervently. We were almost finished when E and family walked through the door, the table next to us was still empty and our duo became a six pack. Normally this kind of impromptu happening would make me uncomfortable but I shoved over and enjoyed to chaos. E's dad stayed for a bit but then had to leave for a dinner meeting. We put the kids at one table so the moms could talk in peace. This is a neighborhood place and K is pretty comfortable there, she should she's been going since she was about 5 days old. It's the only place I will allow her to visit the restroom without me. She was thrilled to take a trip to the loo with her bestie. They ate a little but mostly table hopped as the place was filling up with friends and schoolmates. A far cry from the worried little girl I left in a brightly colored classroom back in September.

I talked with E's mom, another E for a while but we mostly watched our kids as they enjoyed each others company and strolled around the restaurant holding hands trying to ditch E's little brother who is actually the coolest 4 year old kid I have ever met. When it was time to go they were all exhausted but wanted to stay, they were thrilled to hear that I was driving everyone home and would have an extra five minutes in the car. I even let K sit in the back next to E without the booster seat, that made my stock instantly rise (not sure if that was a bad attempt at humor given the ridiculous volatility of the market today).

When we got home I peeled the clothes off K and she instantly curled up into a ball of cuteness and fell asleep. I so wanted to do the same but I had messes to clean, emails to return and texts to answer. I tried to concentrate but like K, I was wiped out. We had been on the go since Monday and it was starting to take it's toll. While I thoroughly enjoy the social activity on Facebook, I'm more of an anti-social networker in person. I am learning to to overcome this and my first grader is a good teacher. In fact most of my interaction has been with her this week, except for a grown up dinner with my friend L on Tuesday.

I only kicked and screamed a little on the way there.

Maybe I should have an Open House of my own soon.
Posted by MicheleB at 9:38 PM