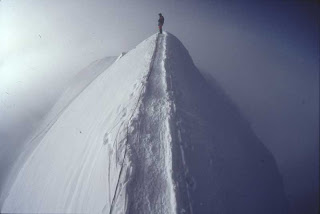 We all have fears, some of us ignore them, some live with them and some even try to conquer them. Choosing which method you take to deal with fears is a very personal matter, one I don't take lightly. I have my fair share of fears, some are normal and some border on the ridiculous. I think the OCD has a lot to do with a few of them, like my irrational fear of electricity which stems from worrying about leaving things like my flat iron turned on and sitting on my bathroom counter. I can't even use it sometimes, not because I can't figure out how to use it without burning my head, I can't deal with the sudden rush of fear that overtakes me when I think that it might be burning my house down. Seriously, I have turned around so many times to check only to find my flat iron perfectly coiled up in my bathroom cabinet. Once at a party for K's preschool graduation I made D go home and check, he found nothing of course. When I do use it I must take a picture of it unplugged and sitting in it's basket.

Sometimes I have difficulty plugging or unplugging things, we used to have a Foreman grill that didn't have an on/off switch and it sparked every time I plugged it in, this freaked me out to no end. I was thrilled when we got a new one with a power button. It's an irrational fear but a huge one for me. Yesterday after my shower I was plugging in my hair dryer when my finger brushed against the outlet, I guess they were still wet because I got what I now know is an electrical burn. My deepest fear and it only hurt for a second. It's not something I'll ever do again but it didn't kill me like I always thought.

Later that day I was getting things ready in the kitchen, all of a sudden I heard K yell "oops" I wasn't too worried, I must hear that about a hundred times a day. She came up to me and told me that she blew out the fire n the kitchen. Huh? Then she showed me the stove and told me that she could see a little fire and wanted to blow it out, like a candle. CRAP!! The biggest of my ridiculous fears, the gas stove and oven. This fear has been with me forever. Once when I was younger and watching my sister the pilot light went out and I had to find a neighbor to light it, I was 17. I can safely say that I have never lit one of those suckers. In fact I can you that I would rather sit in a stinky gas filled kitchen than light that tiny flame. Luckily only one was out and I still had two burners to use even though I needed three. Too bad I wasn't about to cook with lethal gas escaping right next to me! I called D and told him my kitchen dilemma and he told me to just light it. WHAT? This is probably one of my biggest fears, one that I have not been able to get over. I even rode the giant ferris wheel a few years ago during a preschool fundraiser at the Santa Monica Pier because K wanted to go on it, and my fear of heights is epic!

I decided that I was on a role lately and if I did it quick it would be a monumental accomplishment for me. I sent K out of the kitchen because I was convinced it would blow up. I kept D on the phone, just in case and a few seconds later: I had a fully operational stove. I did it. I know it's no Everest but to me it was huge. No explosion, no fire, just a tiny flame that allowed me free range with my uh, range. I felt good. Two of my biggest fears almost squashed within hours.

I take this as a leap towards my zen master status. I can now hopefully turn the corner onto my street without the worry that I will see my home on fire (yes, this was a real fear of mine). The next time my child decides to put out that little fire in my kitchen I won't have run for the take out menus.

It doesn't matter what the fear is, conquering them takes the same amount of bravery because to the owner of that fear it's just as daunting. I'm sure there are some fears that I will never get over, like riding in tiny elevators. That freaks me out completely, not the getting stuck part, living in NY gets you over that fear quick. It's being stuck in a tiny space that I hate. Also tunnels bother me but only in Los Angeles, I don't think I'm alone with that one.

I accomplished a lot yesterday, overcoming a fear of electricity and gas is a huge thing. I haven't used my flat iron yet, but if I can use it in the morning without that awful pain that flows through my body when I think about it, I'll know I'm a little closer to zen master.


Maybe Saturday I can try the gas BBQ.

Nope, ain't conquering that one!!
Posted by MicheleB at 8:35 PM