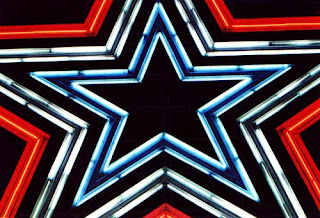 K had a shoot today, a direct booking for Kohl's Cares which supports youth-serving non profits in local communities. I picked her up from school a little early and got to the location, a local park with man made lake, in less than 30 minutes. The directions were vague, drive through the park until you see the truck, luckily we know that "truck" means converted motor home. K spotted it first and barely let me stop before she flew the car door open. We gathered our stuff and walked ten feet to check in. I love local shoots with awesome parking. As soon as we got out of the car I heard someone yell K's name, she squealed in delight when she saw her favorite stylist, a guy she's been working with for years. I gave K's paperwork to the set teacher, another guy we've worked with before, he's more of a set guy-who-hangs-with-the-kids than teacher, luckily she didn't have any work to do. The production coordinator came over to meet us and recognized K, we've worked with him too. It was going to be a nice day for me. I could sit and relax while K did her thing a few hundred feet in front of me. I knew that not only was she in good and familiar hands but that she was going to knock it out of the park. She loves this crew.

Sometimes I worry that she'll get bored, not listen or just not be into it. It's been known to happen, sometimes on set she knows that she has an audience and likes to act up because she'll get away with it. She knows that I'm not about to yell at her in a room full of people, she also knows that all of the parents do whatever they can to keep their kids happy. No one wants to have the miserable kid on set. I will take her aside and let her know that enough is enough. She'll try though, they all do, that's why we are grateful when there's a cool crew to distract them or a teacher to stick them in school for a while.

Today they took her right away, no waiting. She emerged soon after in a cute little outfit with very little hair and make up done, they wanted the kids to look like kids. They even told her not to worry if her hair is messy. I love that. She took off to the set, arm in arm with the older girl who was about 10. I stayed by the motor home but was able to see her. The other kids were then brought to the set, two boys one 6 and one 10. I knew that she would soon wear them all out, it was hot but she wanted to play. After an hour the older girl left and it was K and the boys, after a while she had organized some sort of game that involved throwing a ball as hard as possible. She was pretty good too, the boys got tired and she started running around with the crew.

Shoots in the park are so much fun, huge wide open spaces with a new supply of playmates for the kids, shady craft services area and air conditioned motor home for the parents. Today we lucked out, the three other kids were cool but better still, the parents were too, and I pretty much spent four hours talking nonstop. My poor book sat there, neglected once again. Every half hour or so K would emerge from the set only to be hurried into wardrobe for a new outfit. She would come by and check in with me, mainly because I was near the food and by food I mean snacks. When I asked her if she was having fun she replied "so much fun, I gotta go mama, the whole crew is waiting for me!"

Right after what we thought was the last shot she was walking back to the truck talking with the Production Coordinator, he asked if she was tired and she said "no, I want to work more, can we do another shot?" I think they even tried to get one in but it was getting late and they had been there all day. They signed the remaining kids out and we all packed to leave, we were the only ones without a long ride home so we took our time. K was still playing with the paper airplane they made for her. At one point she managed to get it on top of the truck, her new favorite crew guy got it for her and she was so upset she wasn't allowed to follow him. I love my "tuff" little girl, she pretty much ignored the girls who dressed her (they're too boring, mama) and spent her breaks with the boys (they football with me, mama). She took forever to leave and said goodbye to everyone.

On the ride home she even commented how much fun this shoot was, then she asked to go out to dinner. We compromised, we brought home sushi and had a carpet picnic. I didn't think I had the energy to do anything but eat dinner sprawled out on my living room floor.

About a minute after she hit the sheets she was out like a light. I don't know how she made it that long. She was like a puppy today, running around and having "the best day ever!" Can you imagine having a better job? My best day at work was still work. I hope she has the same enthusiasm for everything she does. It's starting to rub off on me, I even had a good time.

Except she wore me out, just like her playmates today. Where does she get the energy? Seriously, if we could find a way to harvest it our dependence on oil would be a thing of the past.