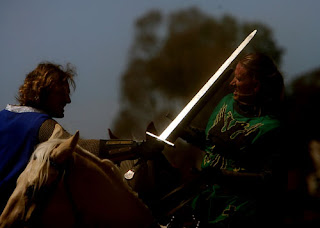 Every year D makes the same vow to do two things, which we never get around to doing: take us to the snow so K can learn to ski and go to the Renaissance Faire. One I'm totally into, one makes my skin crawl. Sunday he got to cross one off his to-do list. With braided hair and a princess dress in hand (for K, I had a more urban pirate look going on) we piled into the car and drove to Irwindale, wherever that is.

The entrance was already backed up and that was just to park. I promised to keep it together and try to enjoy myself, especially since D wasn't really into going in the morning and I convinced him that we should, it was the last day. It took a while to park but we finally made it, the short walk through the parking lot was unexpected, I thought for sure it would be a hike. When we got to the ticket booth my worst fears were realized, there were so many people in costumes, K was laughing at the giant boobs on most of the women, OK, I was too. It was also really windy and I had forgotten to take my Sudafed, which worried me since the dust and hay flying around was bad. We made it about 10 feet when K saw a flower headband she wanted, I said if she wore her dress she could have it. I wanted her to look cute for pictures and I was tired of carrying it. She immediately put on the dress and picked out her headband. It was so cute neither of us balked at the $15 price tag, not that it's a ton of cash but I can probably make about 20 of them myself for that price.

We walked a little more and the "I'm hungry, I'm thirsty" chorus started. My child has a strange affliction, at home where the food is plentiful and free she won't eat, when we are out and it costs money, she's starving. We found a drink for her and then set off to find the food, which apparently was meat. The wide open food court was broken down to four groups, meat, meat with cheese, meat with meat and meat with meat and cheese. K was mesmerized by the giant turkey leg, but not as much as D was. They each got one and I selected the 1/4 chicken, the most Zone friendly option. It was all surprisingly good, seeing K hold the giant leg and chomping down on it was worth the trip for us, she loved it!

We then walked around some more, this time K was fixated on a fox tail. She absolutely, positively had to have one to complete her Renaissance Princess look. We finally found where they were selling them, I didn't even care what they cost by then, I was tired of hearing "where are the tails, mama?" She did look cute, I knew that she would want to wear it all the time, I saved this debate for later. While the wenches were trying attach K's new appendage I wandered around the tent and looked at the clothing, avoiding the painful bustiers, much to the disappointment of my husband. I did however find a cool shirt that was actually a scarf, D was all over that, especially when the wench came over and showed me how to tie it. I'm not being disrespectful here, that's what the chicks are called.

After more walking around and breathing in the dust and hay we decided it was time to go home. Of course by then we had walked all the way around the place and had to backtrack to the beginning, there was no easy path back. We trekked back to the entrance and bid adieu to the Faire. As we made our way to the car I realized that I might have had more fun than my weary companions. Shocking!!

We made it home safe and sound and filthy. I think we might have taken more than our fair share of dirt home with us. Showers were mandatory and welcomed!

I almost didn't want to admit how much fun it was, I actually enjoyed myself and wasn't merely amused by the ridiculousness of it all. Although that was clearly there as well. K is already planning her visit next year.