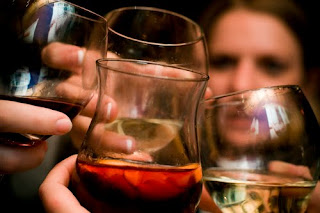 This might be one of those weeks. K is supposed to do a print job but we don't know when. The audition was this past Friday after school, I knew the fittings were supposed to be the next day so when I didn't hear anything that night I gave it the "on to the next." During a dinner out on Saturday I saw a bunch of missed calls from K's agent. She had a fitting on Sunday at 11AM. Cool. I convinced D to come with us, it actually worked out quite nicely, he was able to load a movie onto his edit thingy while we went to the fitting. They gave K the cutest outfit and took a few Polaroids (really, I thought everyone had gone digital!). Before we left they sent her to see the hair person who gave her a much needed haircut, she was so nice, she even collected the hair for K's collection (don't ask) and told me to bring her to the set as-is, her hair was perfect. That was nice, I usually get grief for that.

Anyway they said they were shooting Tuesday through Friday but had no real schedule yet. That means that I must be prepared to be potentially called at the last minute, if they even call, I've been through this before, even with this same client. They are always amazing locations and fun shoots so I do hope to get the call. They told K that they'd see her in a few days so if they don't I'm sending her to the set so they can hear it this time.

Since we don't really know what the week will bring we decided to go to karate today, we had never been on Monday and since the weather was crappy I knew it wouldn't be crowded. I was right. The class was mostly younger kids, only K and another boy were in the "older" class. I watched for a bit, it was nice since I usually end up gabbing with my friend M (which is always cool). I was watching K do foot sweeps and she took her opponent down again and again, I was so proud. I made a comment to the mom next to me that I hope she can remember to do this in high school. She laughed and we talked for a second, she brought up the traffic which was particularly hideous. She made a joke that there better be wine when she got home. I loved her immediately.

We started talking about how nice it is to unwind with some wine at the end of the day. That we love our kids but it's OK to have some alone time to unwind. Somehow the discussion turned to kids parties and I told her that we always had some sort of "adult beverage" at K's parties and had a keg at her first. The love was mutual. She told me to please start coming to the Monday class, it was full of moms who clearly need a glass or gallon of wine. That started a discussion on the phoniness that some parents around here tend to exhibit. She was open and honest about parenting, just like me, and said sometimes she felt like screaming and was disgusted by the parents who never admit to being less than perfect. We discussed our kids preference for dirt and disdain for those kids who are afraid to get dirty. When her son was finished she laughed as she showed me his "ghetto shoes" a pair of filthy yet adorable Vans. I smiled as I pointed out K's Uggs, they are so dirty I won't even touch them. I told that if we can we'll be there on Wednesday. I like making new friends, especially the kind that like to unwind at the end of the day, or anytime after 12PM with a glass of wine. She made the "It's 5:00PM somewhere" joke and I knew I was hooked.

I have a feeling we would have really fun playdates!

Cheers!
Posted by MicheleB at 5:36 PM