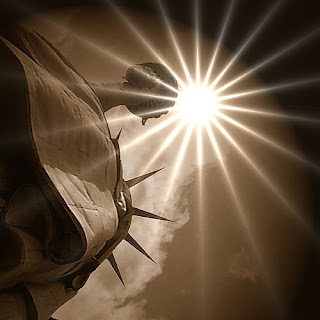 Not like the brazen giant of Greek fame
With conquering limbs astride from land to land;
Here at our sea-washed, sunset gates shall stand
A mighty woman with a torch, whose flame
Is the imprisoned lightning, and her name
Mother of Exiles. From her beacon-hand
Glows world-wide welcome; her mild eyes command
The air-bridged harbor that twin cities frame,
"Keep, ancient lands, your storied pomp!" cries she
With silent lips. "Give me your tired, your poor,
Your huddled masses yearning to breathe free,
The wretched refuse of your teeming shore,
Send these, the homeless, tempest-tossed to me,
I lift my lamp beside the golden door!"

It's no secret what Emma Lazarus was saying when she wrote "The New Colossus" in 1883, an excerpt from that poem is inscribed on the base of the Statue Of Liberty. The poem describes a woman, Mother of Exiles, asking other countries to give her their tired, poor, and tempest-tossed people. By welcoming other nation's unwanted outcasts, the poem gives the Statue of Liberty a special meaning to new immigrants. A place where they are not only welcome but have actually been requested.

This philosophy seemed to work for generations, most of our ancestors at one point or another filed though the halls of Ellis Island to the promised land: The United States of America, who welcomed them with open arms. Lady liberty embraced their culture and all they had to bring to the melting pot that was the US of A. I grew up in a neighborhood of mostly middle class Jewish families, some of my friends had grandparents who came here during or after WWII and had accents. This was the norm, not only in my small New York suburb but all over the "land of the free and the home of the brave." I mean we all came from somewhere else, right? Unless your ancestry can be traced back to the Native Americans, or American Indians as they preferred to be called according to a 1995 US Census Bureau of home interviews.

This brings me to the place I've avoided discussing for a week. Arizona Senate Bill 1070.

When I first heard about this I thought it was a joke, some ridiculous idea no doubt conceived by fringe teabaggers, or Rush Limbaugh. It wasn't a joke. On April 23, 2010, governor Jan Brewer signed the Arizona SB1070 legislation into law and it is scheduled to go into effect on July, 28, 2010. The bill which makes it a misdemeanor for any illegal immigrant to be in Arizona without carrying official legal documentation. The bill also steps up state and local law enforcement of Federal immigration laws which cracks down on anyone sheltering, hiring or transporting illegal immigrants. So basically you will now be breaking the law if you walk out the door without your "papers." Scary. One can't help but conjure up images of the gestapo and the searches they did. Opponents of this law are so disgusted it has been nicknamed the "Driving While Brown Law." The Arizona Immigration Law as it is currently written gives law enforcement agents the complete freedom to make decisions based on race and ethnicity.

This law is bound to be challenged for a number of reasons one of them being it essentially encourages racial profiling, another valid legal challenge would be that Arizona cannot conceive its own plan to regulate immigration, that is actually the right of the Federal government making the whole thing unconstitutional. It would seem Arizona lawmakers should know something like that.

I'm not saying that we should ignore the immigration situation but surely we can find a more humane solution. The answer lies somewhere between doing nothing and Arizona SB1070.

In a way we should thank Jan Brewer for bringing this topic to the headlines. Obama made an early promise to take on immigration reform in his first 100 days, a promise that has been pushed back several times. I don't know how much longer this can stay off the table. There are currently an estimated 12 million immigrants living in this country illegally. The longer this issue is put off the longer this list grows.

This has been a busy year for Congress and it's about to get busier. Health Care Reform, Financial Reform and now Immigration Reform are going to make some politicians wish they were in the losing column on Election Day.

It's about time those guys and gals in Washington earned their keep.
Posted by MicheleB at 6:56 PM