This and That (but mostly burgers) 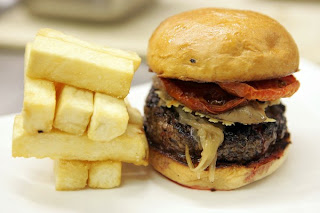 It's going to be one of those random posts today, I can feel a bunch of crap swirling around my head now fighting to get out. I've been trying to get stuff done this week and failing miserably. Yesterday morning I went to the dealer because my car told me it needed it's oil changed (love having such a communicative automobile) I was there early but not early enough, apparently the upcoming long weekend brought out the car care slackers and I was told the wait was about 3 hours. Uh, no thanks, even I can't sit and text or play with my iPhone for that long. He told me to come back the next day at 7:30 and he'd take me right away. Clearly after years of service Gabe does not know me at all. It was still pretty early and I didn't know what to do so I went to Marshall's, not just because it had been over a week since my last visit but because it was close to the dealer. On the way over I called A back, she had called me earlier and was shocked to find me out of the house so early. I tried to convince her to meet me at Marshall's which is conveniently located to one of my favorite latte places, she wanted no part of it and preferred to stay close to home. I agreed to meet her at a local deli after my fix.

We went to Fromin's one of our usual places, one she's been going to since childhood. If I can't get my car serviced the least I can do is shoot the shit with my bestie, after about a zillion cups of bad coffee we decided to kill the last free hour of our day strolling around Santa Monica. It was a beautiful day and strolling along Montana Avenue was a perfect activity. After we parted I took a short drive to K's school and picked her up. Since it was Tuesday I had to pay attention to my watch. K gets out of school at 1:45 and karate starts 3:30. I cannot show up 90 minutes early again!! We went home, did homework and arrived a very dealable 15 minutes early. K was happy because she got to help the little kids, her new favorite thing. I was happy, I got to sit in the corner and read my book. It was a nice quiet hour, I only chatted for a few minutes with a cool mom we met last week.

After karate I promised I would take K out to dinner: on Monday during "The Best Thing I ever Ate" Giada De Laurentiis was talking about the burgers at Umami, K and I watched with delight, there was a new one in Santa Monica! I told her the next time D was going to be late we would go. We only had to wait 24 hours, he was taking a Tai Kwan Do class on Tuesday. So as soon as class was over K rushed to my chair, she was so excited to go to "Giada's hamburger place." I was a little worried about how she would like it, it's not a Happy Meal burger, of course K is not a Happy Meal kind of girl. We walked in and the place was empty, it was a little after 5PM, not our usual dinnertime but if we were to go home there was no way I would have felt like leaving again. Early dinner it was, neither one of us complained though, we both agree it's always better eating out, no matter what time it is.

We ordered our food, K was able to get what she wanted, a burger with lettuce (which she will always take off) cheese and tomato, a modified SoCal Burger, I ordered their signature Umami Burger. K lucked out and I bent my "no soda' rule as they do not have lemonade, her drink of choice, I settled for water since I cannot have my drink of choice if I am to be driving, especially with K (my other house rule). When the food arrived we were speechless, the burgers smelled wonderful and the perfectly round shiny buns looked more like sculpture than dinner. Another rule that was suspended for the evening was my no bread rule. I usually just leave the bun but once I caught sight of this beauty I knew that wasn't going to happen. We both went to town barely speaking but laughing at the mess we were creating, the fries we were sharing (another rule out the window) were disappearing quickly. When the waitress came to see if we wanted dessert we gushed about the amazing food we had just inhaled, surely there was no room for dessert. Then she mentioned Mint Chocolate Chip Ice Cream Sandwich, I think I heard the fibers on my jeans yelling for help. We finished that dessert so quick it was if it had never been placed on our table.

That was it, it was back to home and off to bed, we were both in a self induced food coma and quite happy about it. Before we left K announced that she'd be back this weekend with her dad. She wasn't kidding.

Wednesday was a busy day for me. I had to play stylist and find some cool clothes for K's photoshoot on Friday, I drove down to the Promenade, there was a store that had what I needed. The first parking lot I entered was full, I drove all the way up and back down before I figured this out. I passed all the other lots that were full as well. I went around to the other street and entered one that had spots available. It did not. I drove to my "secret" lot that requires a boatload of quarters (which every good stagemom always has) and it was full too. I called D to complain, his option was to park on the street somewhere far an walk. Oh hell no!! I re-entered one of the lots and scored a spot. I swear this took an hour. Then I went to the store I was told had the clothes I needed. They had nothing. Crap. For some reason I went into Gap Kids and by some miracle they had the Stella McCartney line, and it was ON SALE!!! I scored two gorgeous dresses, I paid and left quickly before I talked myself out of buying them. Then I picked up K and we went to a cattle call. The only reason I even went was to say to a friend who we had not seen in a while, I had bought something for her new baby who was rumored to be there as well. We waited a while but it was fine, we had nowhere to go and K was playing ping pong with some girls she met. After a while it was her turn, we went in, saw our fabulous friend and left, no baby, maybe next time.

Traffic all day had been awful so we took side streets home. K did some homework I made dinner (and a huge mess) and that was it. I was wiped out. My day of nothing was exhausting! I chatted on Facebook for a while but mainly because I was too tired to actually get up to go to bed. I knew I had more shopping to do but I'm hoping to pull the looks together from what K already has in her closet.

So that was it, this and that, no big deal. My world does seem to revolve around food. I'm hoping it revolves around perfect Umami Burgers this weekend!!

This time I'll wear bigger jeans.
Posted by MicheleB at 8:08 AM