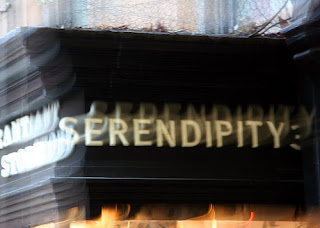 I would have titled this Serendipity but I would for anyone to think of that stupid movie with John Cusack and Kate Whatsherbutt. For me serendipity is not only one of my favorite words but also one of the cutest places to eat in New York (which probably explains why I love the word so much). When I was young I would go there for their world famous Frrrozen Hot Chocolate after schlepping around Bloomingdales. OK, I was older too, it was actually a regular stop for me, I just don't like to admit to paying so much money for a beverage that doesn't include Amaretto.

I'm not going to write about the movie (which sucked) or the restaurant (which rules!) but the serendipitous moment that happened last week. Last Tuesday when I first brought K to try out karate I was hoping to find a quiet spot in the corner to watch her and relax. I saw a few people I knew from K's school and said my hellos but made no effort to do more than that. About halfway through the class I hear someone calling my name, since it's a common name it took me a few times before I looked up. It was a friend that D and I had met through other friends, her son was in the younger class. A woman, M, that I thought was nice enough, D got along well with her husband and K adored her daughter. We saw each other at birthdays but that's about it. We live in the same town but run in very different circles and never run into each other.

I was happy to see her and moved over to chit chat, we played catch up and walked out together. That Thursday they were there again as well, so much for my peace and quiet. We chatted throughout that class too, suddenly I was one of those mom that can't shut up. When I saw her this Tuesday I was in a daze, still embarrassed from the super early arrival (90 minutes early!) I told her about my current state and opened about my MIL issues, hoping that she would sympathize and not judge. I was wrong, she wasn't just sympathetic she was empathetic, apparently I hit a nerve and found a common bond. We barely noticed that we were in a room full of other people and swapped stories like old friends. The next day K wanted to try the Wednesday class so after school we checked it out. Not expecting to see anyone I slipped into a quiet corner with a book, moments later I was tapped on the shoulder M was there too, making up a class her son missed weeks ago. We continued our conversation about family and the hour flew by. I suggested that maybe we take it out of the dojo and away from her older child who was sitting nearby. We made a plan to meet for breakfast Friday. That didn't stop us from gabbing through the whole class the next day.

I was excited to meet her on Friday, away from our kids and a roomful of other parents. We talked for a while about our kids, summer plans and how much we love the karate class. Then we dove into deeper waters and further discussed our MIL issues which led to the legacy issues we've both been carrying around. She opened up to me about things that felt familiar. We shared the same views on everything from child raising to the positive/negative energy of life. We both got to this point after coming to a similar crossroad. She got to a point in her life where she didn't want to live with her anger, an emotion that she knew stemmed from childhood and the mother she lost when she was 15. She consciously made an effort to sit down and write out all the things in her past that brought her to that moment, then she looked at it, evaluated it and wrote the reasons she thought her mother did what she did. After taking a step back she looked at the document she had created, her grievance story. What she realized after laying it all out like that, was her mother did the best she could, her actions were always to do the best thing for her daughter, in the only way she knew how. My friend M, at that moment, turned her grievance story into a forgiveness story and with that action freed her from the past. From that day on she was able to see things from a different light.

Then I shared my past with her. We laughed about how much you never know about a person, even after almost 10 years. I told her wasn't possible to get to know a person's true self until they are willing to admit to it. I was more comfortable with people thinking I was a bitch than to know how wounded I was. I felt bad for the way I judged M, not giving any thought that there may be a real person under her designer clothes and perfect smile. We had to cut our meeting short, her young son was due to be picked up from a playdate and I had important closet purging to finish. Neither one of us wanted to leave.

We said our goodbyes in the parking lot and decided that this should probably become a regular thing. It was so liberating to sit and discuss the complexities of life with someone who was able to see it from both sides.

I returned home refreshed and recharged thrilled to have had such a wonderful morning. A morning that would not have been possible without K's karate class. Serendipity. Another example of how much that word means to me. I look forward to these classes now, not so I can sit in quiet isolation and read but so I can sit with a friend and enjoy the moment. We aren't always going to discuss our past or problems with our MILs. We'll just be two moms enjoying the hour.

It's been a long week of this and for once, I'm happy about that!
Posted by MicheleB at 7:55 PM