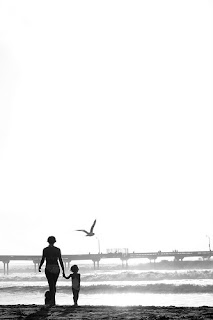 I want to wish everyone a very Happy Mother's Day. I got the most beautiful gift from D and K, an amazing video shot by D and starring K who goes around to all of our haunts and tells me how much she loves me. Having a husband who is an editor has it's advantages. It was without a doubt the best Mother's Day gift a mom can get. I know that I will be watching this every day and crying every time. Thanks guys. It was a beautiful day in Los Angeles today and after a killer brunch at my favorite restaurant we spent a nice part of it running after K on the beach. I would love to say the whole day was perfect but I can't have a Mother's Day without a MIL and sad to say my drama counter had to be reset today. Instead of focusing on the negative I am sharing a beautiful poem instead of a complaining rant. Please enjoy this gift from me to you:

There Was a Child Went Forth


There was a child went forth every day,
And the first object he look'd upon, that object he became,
And that object became part of him for the day or a certain part of the day,
Or for many years or stretching cycles of years.

The early lilacs became part of this child,
And grass and white and red morning-glories, and white and red clover, and the song of the phoebe-bird,
And the Third-month lambs and the sow's pink-faint litter, and the mare's foal and the cow's calf,
And the noisy brood of the barnyard or by the mire of the pond-side,
And the fish suspending themselves so curiously below there, and the beautiful curious liquid,
And the water-plants with their graceful flat heads, all became part of him.

The field-sprouts of Fourth-month and Fifth-month became part of him,
Winter-grain sprouts and those of the light-yellow corn, and the esculent roots of the garden,
And the apple-trees cover'd with blossoms and the fruit afterward, and wood-berries, and the commonest weeds by the road,
And the old drunkard staggering home from the outhouse of the tavern whence he had lately risen,
And the schoolmistress that pass'd on her way to the school,
And the friendly boys that pass'd, and the quarrelsome boys,
And the tidy and fresh-cheek'd girls, and the barefoot negro boy and girl,
And all the changes of city and country wherever he went.

His own parents, he that had father'd him and she that had conceiv'd him in her womb and birth'd him,
They gave this child more of themselves than that,
They gave him afterward every day, they became part of him.

The mother at home quietly placing the dishes on the supper-table,
The mother with mild words, clean her cap and gown, a wholesome odor falling off her person and clothes as she walks by,
The father, strong, self-sufficient, manly, mean, anger'd, unjust,
The blow, the quick loud word, the tight bargain, the crafty lure,
The family usages, the language, the company, the furniture, the yearning and swelling heart,
Affection that will not be gainsay'd, the sense of what is real, the thought if after all it should prove unreal,
The doubts of day-time and the doubts of night-time, the curious whether and how,
Whether that which appears so is so, or is it all flashes and specks?
Men and women crowding fast in the streets, if they are not flashes and specks what are they?
The streets themselves and the facades of houses, and goods in the windows,
Vehicles, teams, the heavy-plank'd wharves, the huge crossing at the ferries,
The village on the highland seen from afar at sunset, the river between,
Shadows, aureola and mist, the light falling on roofs and gables of white or brown two miles off,
The schooner near by sleepily dropping down the tide, the little boat slack-tow'd astern,
The hurrying tumbling waves, quick-broken crests, slapping,
The strata of color'd clouds, the long bar of maroon-tint away solitary by itself, the spread of purity it lies motionless in,
The horizon's edge, the flying sea-crow, the fragrance of salt marsh and shore mud,
These became part of that child who went forth every day, and who now goes, and will always go forth every day.
Posted by MicheleB at 4:46 PM