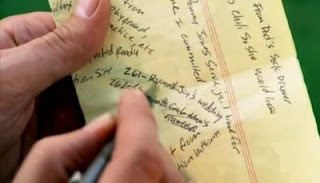 This was quite a week for my to do list. It never had a workout like this before. Usually it sits ignored in my purse (or my head) for days (OK, for years sometimes). After last weekend's loss of emotion control my refocus neurons took over and cleared a path for the order that so badly needed to get out.

Looking back it doesn't seem as monumental as I make it out to be but it was forward progress on ALL levels, a big thing for me. First I took the anger at my MIL's idiotic ploy for attention and re purposed it. It went on to be the inspiration and driving force behind the organization and purge project currently going on in my abode. This is a long process but I was able to start immediately and within hours had packed up a car full of unwanted memories which I promptly dumped off at Goodwill. Then I went to the mental purging. Check! This wasn't as easy and it was also going to be an ongoing project. I did my best go delve deep into they "why" as I discussed last week. I was able to channel my inner Zen Master and come up with my own moment of clarity. This was another big thing, maybe it's not the most perfect of conclusions but it was mine and I was happy for it. We can't all be Buddha or Ghandi, we can only do what's good enough for ourselves. I realized that it doesn't have to be perfect, it just has to work for me. Another check!

The next one was something I did to myself, I became lax about my diet. So starting last Monday I went back to Zone and within days was feeling better. This made my weekend's trip to Vito's for pizza a little more dealable. I didn't stress over the evil carbs I was consuming, I just enjoyed to two slices of heaven that were placed in front of me on oil soaked paper plates. Yum. It's easy to slip back into bad eating habits when you nod off and shift to autopilot. I can't say that this will never happen but for now at least, my "comfy" jeans aren't tight. Check, thank goodness!

This brings me to another self created issue that goes back about 6 years (well longer than that actually). When I met my bestie A I told her that I was a certain age. Shortly after Starter Husband I went through a phase where I was pissed off about starting over. I was years off my "life schedule" and not dealing with it like I should have. I decided to knock off a few years from my actual age, putting me back on "schedule." Not the brightest move but it seemed to make me feel better. For some reason when I met D I had no problem telling him how old I was. I believe this is because we are almost the same age and he didn't seem to have any kind of "life plan." When I got pregnant I was happy to see that most of the women I met were close to my own age, some were younger but I was around the average. When I met A I was back to feeling pissed off, so I told her my fake age which was still a couple of years older than hers. I must look somewhat young because it didn't phase her at all. As time went by D helped me feel more comfortable about how old I was, even convincing me to have some people over for cake one year (I am not a big birthday person). This was after the giant surprise 40th I threw for him (I am a big celebrator of other people's birthdays).

Still when it came to A I could not tell her the truth. At this point it was more embarrassing than anything else. Now that my birthday is coming up I knew that A would be doing the math and realize that a milestone birthday was approaching. Or at least what she thought was a milestone. One I hit a few years back. We had a lunch planned for last Thursday and I made a vow to tell her then. When she unexpectedly showed up with her young son that plan flew out the window. I was relieved but disappointed, I was on a roll and this would have been a huge check for me. She called me on Saturday to tell me a funny story and I realized I had another chance to come clean. She brought up my birthday once again but this time I didn't change the subject I just blurted out my secret. She didn't believe me. She thought I was trying to get out a party. I managed to convince her and we had many laughs about it, I felt great. It was a minor prevarication which caused no harm but it had become a thorn in my side that had poked me for the last time. Check!!

The final item I was able to cross off my list was Online Traffic School. I had been putting this off for weeks and I knew that deadline was approaching. Not completing this meant that a point would go on my licence and my insurance rates could go up. I had started and stopped this process months ago but could not fin the concentration skills necessary to complete this, the most boring of my "checks." I convinced myself that this was the time to do it, I had come so far this week, might as well cross the finish line. I got to work while D occupied K and did laundry (reason enough to finish!). I started to lose my focus and my wonderful husband poured me a cocktail. There was nothing in the rules that said I couldn't drink and learn. I did see the irony in this and felt the need to announce it on my Facebook page. I love to entertain.

Finally after what seemed like hours I was at the final exam. I hate tests but this one was open book, at least open internet browser. I didn't even need it, somehow either I retained all I had read or I'm the most amazing driver in Los Angeles. Either way I aced the test and completed another task. Check.

My head feels lighter, I no longer have a huge task list to lug around and I am now free to add things to it! Things that won't be stuck there for days (or weeks and years). I almost want to go out and buy a book on battling procrastination but putting that off, like I know I will, might just drive me over the edge.

See ya Scarlett!!
Posted by MicheleB at 9:49 PM