Lost in haze of the wine 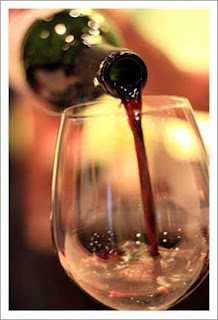 Well wine and maybe a few other things. Today was an unusual Saturday as we had no birthday to attend, no audition and D was not working. The weather was even cooperative. It was a perfect day! In the morning D took K to their piano lesson, breakfast and some other activity that they are being secretive about. I'll just say what they said, they went to the park. The reason I know this wasn't the case? K came home relatively clean, an impossibility when you combine my daughter and dirt of any kind. Sorry D, I won't press it or ask, I'll just let it be.

After that we all went down to the 3rd Street Promenade and had a late lunch. We walked around outside taking the in the beauty of the day and watched K wreak havoc on the tourists as she zipped by in her Heelys. We didn't even shop, we just walked around looking at all the puppies that seemed to be out walking their owners. I did buy a new bra and panties. Somehow every time we are down there I end up with new underthings from Victoria's Secret. K loves to wheel around that store for some reason and I always have to pretend I don't know them :) There was a bachelorette party in full swing happening there. The bride-to-be was wearing a headband adorned with, there is no polite way to say this, penises. It was pretty funny and all the girls were adorable and having a great time. D actually pointed this out to me and I said I should show it to K. Bad parenting or awesome sense of humor? I pick the second choice. I told K to go see her headband and she asked the girl what was on her head. The poor thing was a little flustered but recovered beautifully with her answer "they are flowers," she said. K came back to say "she said they were flowers" to which D replied "they aren't flowers." My astute daughter then declared that she knew they were penises and started giggling. We said she was right and K promptly went up to the girl and told her what they were. The poor girls were embarrassed but I assured them it fine, that K was a cool kid with parents that laugh at this kind of stuff. It was a priceless moment in our family history. We have no problem letting K in on the joke sometimes. We prefer her to grow up without any kind of repression.

After that we went home and decided where to have dinner. It was a non stop feeding frenzy for us apparently. We cleaned up and went to a newly renovated hotel that now boasted a trendy and what we hoped to be tasty eatery. We were happy to see that it was both, with the added bonus of being empty. We scored a big booth with an ocean view. Since we had just finished lunch we ordered some things from the "small plates" menu and some drinks. I felt like a glass of wine was in order so I had a few. K fell asleep and D and I finished our "date" with our child sleeping on my lap.

We brought the party home, put K in her bed, and shared some more cocktails. I decided then it was time to write my blog entry and I started my diatribe on the Arizona Immigration Law. Not a good thing while drinking. I wisely decided to leave that for a different day. The wine haze started to take over and I could see that D didn't really want to spend the night watching me furiously peck at my laptop keys. I put the computer away and we continued our date.

Sometimes I actually make the right choice and this was one of them. The wine haze not only saved me from hours of anger caused by the Arizona SB1070 it actually afforded D and I a really nice evening together. Don't worry I'll spare those details.
Posted by MicheleB at 11:04 PM