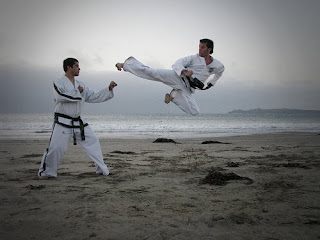 So we started the day with a drive into Hollywood, again. This time it was to drop D at work because he left his car there after we all had dinner last night. It was also so K and I can be there for his orange belt test, we've never been able to see him in action and now was our chance. K was excited to see taekwondad do his kata and meet his sensei, Master Kim. K and I took a seat as D started his lesson, after a few minutes Master Kim had K join in the workout. K had no problem keeping up with them and I got it all with my SLR.

I could tell D was a little nervous having us there watching him. I made sure I didn't make eye contact with him, I would hate for either of us to burst into spontaneous giggles right there in the dojang. He was amazing, I have to say that. I caught a shot of him right before he broke two boards, he was on his toes with one foot and the other was pointed up to the ceiling. Take that Karate Kid! It was interesting seeing my man in his class, it was like watching someone else. I've never really seen him do anything like this before. I felt like a groupie watching a rockstar. No kidding. I never doubted his ability to master any task set in front of him but damn, my man has mad skills! He'll be happy to read this, while I am extremely description and effusive in my writing, verbally I kind of keep it myself. So if you're reading this D, yes, you are awesome. Watching you kick and break stuff was hot. Even in your white PJs, uh sorry, Gi.

OK, TMI, I know. I just felt the need to share. It makes me feel safe knowing that I am the wife of an orange belt and mother of a yellow belt. My own personal Kickass team (thanks N for that one!) I really need to find a martial art to learn. I thought about doing Krav Maga for so many reasons, one of them being the name it will give me: Krav Mama, so fitting with TaekwonD and Karate K. Plus it's from Israel, it would be a nod to my peeps and I like to call it Jewish Judo. I have some friends that do it and from the look of the pictures the post on Facebook it looks tough. I don't think I have the strength right now. Maybe once school starts again. By then I'll have a better reason not to do it!

I notice that having K home with me all day takes away from my writing (and everything really) I'm not complaining, just stating a fact. I am behind on my writing and just about everything else. My house is a mess, my car is filthy, the piles of things to be put away are growing and I seem to owe the world a phone call. I will get to these things but for now I am enjoying the time with my little gal pal. I'll get up to date on my blog, although the posts will be shorter, I'll clean up eventually, it might rain and rinse my car, the piles will get smaller and I will eventually call you back.

Eventually.
Posted by MicheleB at 10:27 PM