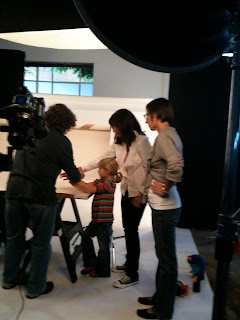 K's had the same agent for years, six of them in fact. It was around this time six years ago when I was bored one day and sent in her pictures to a few agencies. The wait was awful, all sixty minutes of it. We went with the one that got back to us first and never left. I hate change, most of the time. Although K found success at the agency I felt like something was missing. Surely a lack of communication was a common thing at all agencies, I found out that it wasn't and one agent, L, specifically stood out for being the best. I met with her by accident at a photo shoot years ago and decided that I wanted to go with her, she handled most of the kids that got all the jobs. The problem was K's agent was steadily getting her work and we both felt bad. L said any time I was ready she would be happy to take K. Time went by and L started her own agency and after a few months it had become the best agency for kids in Los Angeles.

Every few months something would happen and thoughts of switching filled my head. Loyalty and fear of change kept me and K at the agency. Time passed and annoying problems turned into complete frustration and one day I just did it. I sent an email to L asking if she was still interested in K, minutes later I got a reply, she was thrilled and would love to rep K. I was the one that was thrilled L's girls were known to be the most beautiful girls in the business, she didn't take just anyone either. So the first part of that was done, now I had to tell K's agent.

Since we were going on vacation I would do it after that. When we go back from Mexico L took a vacation with her family, so I pushed it off a week. The next week K was on hold for jobs and had direct booked another one. Another week had to go by. Finally, after weeks of waiting it was time. Today was the day. I was nervous, I never fired anyone before, how was I going to tell someone that I really liked we would not be working with them anymore? Crap. I took a deep breath and dialed the number. Voicemail. Are you kidding me? I left a message to please call me as soon as possible. When the call was returned I was suddenly nervous, was I about to make a mistake? Could I even go through with it? I went to my bedroom and sat on my bed and told K's agent that we were leaving. She was not happy and tried to get me to stay, I told her the truth about why we were leaving. I also told her that it may be a mistake but it was something that I had to do. She was wonderful and told me any time we want to come back the door would be open. I still have ties there, I only took K out of their Print department, Commercially and Theatrically she was still there.

I hung up and cried, then I called D and told him I was afraid I made a mistake. He just listened to me ramble until I was done and told me I've been wanting this for years. Oh yeah. I emailed L and told her we were hers. I got an autoresponse saying she was in the Los Angeles office today. I sent her a message seeing if we could drop off the pictures she needed, I was thrilled that she was up here, she mostly works from her home office way south of here. She was happy to have us stop by. We got in the car and went to meet her. I was surprised to see so many friends there, it wasn't just an agent in an office, it was like seeing a friend at home. We saw some friends and made some new ones. We stayed for hours and the sadness I felt earlier had changed to joy. We didn't just have a new agent, we were part of a family.

Later that night I received an email from L welcoming me to the family and asking if I was feeling better, she knew how hard that phone call was. That email alone told me that I made the right choice, that K was in good hands.

Reading this back it seems like a stupid problem to have but this has become a big part of our lives, it might have started out as a hobby but it's turned into something more. The more time we spend doing it the more it becomes imperative that the people we surround ourselves with have our best interest at heart.
Posted by MicheleB at 10:35 PM