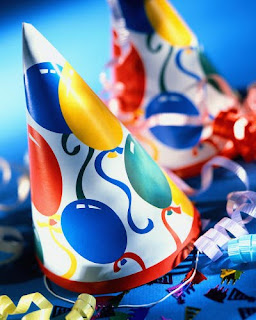 Parties mean something different after you have a kid. Before K was born going to a party meant possibly dressing in something cool and enjoying some food and drinks with friends, talking and laughing until you're too tired to do either or they run out of booze. If you brought something it usually came from a liquor store and if it didn't come from there it was the main ingredient. It sometimes meant crashing at a friends because drinking and driving is bad. If you were single it was a chance to meet a potential partner or at least someone to flirt with. That was then. Now a party conjures up images and sounds of screaming kids hopped up on all kinds of sugar, what to wear is usually decided on location and the only concern is the need for a sweater. What to bring? Whatever is loud or messy, those seem to be the most fun gifts to get now. Food? I can say that it's about 90% pizza and that's on a good day. Today we were off to a couple of parties, one was a kids party for a classmate of K's and one was at D's friend G's house, a throwback to the before K kind.

It was going to be a long day, Saturday meant karate and piano, it also meant we had to deal with having only one car since D's was still at his office, left there last night. I figured out the best possible logistics for this day. D and K could go to karate while I get ready, they can then grab some food and pick me up. I'll go buy a gift for the party during the lesson. We ALL go to the kids party (haha) and then go to the grown up party. The other car will have to wait.

Things went well, just like I planned. K's music school is conveniently located next to a party supply store, a place that has everything even the fixin's for a cool gift. I put something cute together during the lesson, happy that I didn't have to drive anywhere. Then we were off to the party. I knew this would be a cool one, the parents we were cool and so was the kid. She's one of the moms that I always look forward to seeing and enjoy spending time with her. We said our hellos and K took off, I don't think we really saw her again until it was time for cake. All the food was homemade and it was wonderful. They even thought to bring coffee. I was pretty happy with that, I was going to need all the help I can get staying up later.

After a few hours we left, G lives pretty far and we needed to get on the road. We're never sure of who is going to show up over there. There's always the usual suspects but sometimes an unexpected guest pops in and we get to see an old friend. This time it was a couple that I don't know all that well, D has seen them more, they are cool and have a 12 year old daughter GG I have never met. A quiet and shy girl who suffers from autism and has been labeled low functioning. We didn't say much to K about it, we just told her to have patience because it was hard for GG to communicate. K is great, she doesn't care if people are different or act in a way she's not familiar with, she just wants to play, and play they did. Every so often K would ask GG's mom a question, trying to figure out her new friend. They swam together for a while and both seemed to really enjoy each others company. They left early though which made K look for another friend. We were all chatting and drinking, K was running around helping G cook and showing C (G's wife) hew piano skills.

That's around the time the language started. Believe me, I'm no saint, I certainly have my moments but in front of kids, especially mine, I try to go easy. Every few minutes a fuck, shit, fucking, douchebag or combination of these words flew out of the mouth of someone at the house. K is cool, she knows that some words are bad and she should not repeat them (she doesn't). After a while it got annoying and even she was telling people to shut up. We try not to make people censor themselves but come on, it felt like it was almost done on purpose. When the words went from the usual swear words to talk about sex and masturbation we left. Some things are just too difficult to explain. Besides it was getting late and we had a long day.