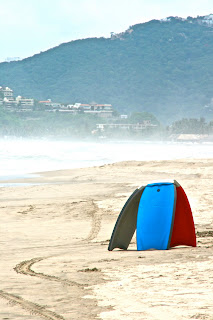 As promised here's the vacation journal I wrote. The newest addition to our family came in handy for writing. My handwriting is hideous so an actual journal is out (I usually can't read what I've written) and there was no way I was going to schlepp my laptop around, especially when I knew the hotel didn't have wifi. At first it was difficult to use, it was like using a giant iPhone and you know how I feel about that keyboard. After a while I got used to it, D put the blogger.com app on it so it felt like I was writing my blog, just not live. It's a cool toy to have, at first I thought it was a waste of money but watching K play math games while we waited for our connecting flight in Mexico City made it all worth it. They even had me playing Angry Birds after about a day (of course I'm completely hooked now).


So I was a little worried about traveling to Mexico, maybe I've seen too many movies, maybe I read too much, who knows, but I was nervous today and it started when we almost missed our flight. We left early enough, our flight was scheduled to leave LAX at 1:10PM and we were in the car by 10:30AM. Of course we hit every single light on the way to the parking lot and then couldn't find a spot once we finally made it to the lot. It was awful. We when finally made it to check in there was a huge line and it was going slooooooooooooooow, mostly due to the tremendous amount of luggage and boxes some passengers seemed to have. Behind us was an even longer line, the one you needed to take your luggage after checking in. This line was at least 45 minutes long and we had about an hour until our flight left. Crap. I inquired ever so politely if there was a way around this line, explaining that there was no way we would make our flight if we had to endure that line as well as the airport security. She was wonderful and said she would take our suitcase through security bypassing then line and we were cleared to go straight through to the screening. That took a while as well due to the ridiculous amount of technology in my purse. Not only did I have our iPad but I had my iPhone, Flip camera, K's iPod, my SLR and all the chargers for these items. They ran my bag through the Xray thingy a few times. When they were convinced I was just a spoiled American and not a terrorist they let me through. We had enough time to go to the bathroom and get some food.

The flight itself was fine, K and I slept for a while after we ate lunch (food on Aeromexico is free) the best thing about these international flights. Free booze! It was awesome. What wasn't awesome was the few hours we has to wait at the Mexico City aeroporto. It was there I was convinced someone would kidnap K and we would end up in one of those Mexican prisons. I'm sure the fact that we were the only Americans and the only people with an iPad didn't help. Finally we figured out the flight board and made it to our connecting flight. We made it to Acapulco without incident

When the cab pulled up to the resort all I could see was that it was huge, when we entered the lobby I could tell that it was nice, check in was a breeze even at the late hour of 11:30PM. When we opened the door we joked, D said it was either going to be heaven or hell. I am happy and oh so thankful to say it was heaven. Our giant room was actually a suite with a lovely living room, dining area, kitchen, huge bathroom complete with giant tub (in the huge bedroom which also had a couch) and a balcony. Did I mention the balcony had a beautiful view of the entire city, golf course and off to the side was our own plunge pool. It was 5 star awesomeness. We ordered food and went to bed. This was going to be amazing.

A pool on the balcony? It was going to be hard to leave this place.
Posted by MicheleB at 9:10 PM