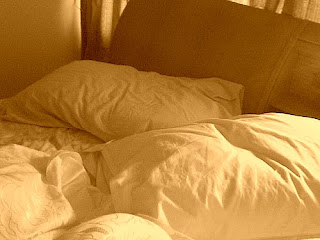 Sort of. D decided that it was time for me to have some time to myself, his schedule wasn't too bad this week and he wanted some alone time with K. He took her with him to taekwondo and then to his office for a little while. After that they were meeting L and J to finally finish their books at Scribble Press and then lunch, after that it was back her to go swimming. I wished him luck. Usually he takes her to the park, not an activity laden day. I told K to listen to daddy but I wasn't worried, she's only really bad with me.

I didn't know what to do and stayed home putting things away all morning. I wanted to just stay in bed but for some reason I am still unable to do that. Time goes by quickly when you don't do anything although I remember it being the opposite way when I was younger. All of a sudden it was the afternoon. I jumped into the shower and got ready, I actually had a few things I really wanted to do. First, it was $2 tank top day at Old Navy, since that is my summer wardrobe I found the offer too good to pass up and going without K would be cheaper. Somehow she always manages to leave that store with a giant shopping bag. Somehow, that's funny. It was strange walking around 3rd Street alone, walking into clothing stores and not having to say "please get off the floor" felt wrong. I went into Hardtail without the worry that K will imitate the yoga poses on the posters, I was even able to try on and purchase something without having to lift a child off the floor.

After that I decided to visit this resale store I like. There's nothing like finding some designer gem at basically the cost of the tax on the original price. It's another place I don't like to take K because I really need to look at the items and that's difficult when K is hiding under the racks. They had so many pretty things in there I took my time looking at all of them. I walked away with a cool purse that I didn't need but couldn't live without, ladies, you know what I'm talking about right? I called D to see where they were, they were finishing up a late lunch and were headed back to our place. I decided to be nice and pick up stuff for grilling later.

Going back home might have been a mistake but I was exhausted, not from the shopping but from the summer of entertaining K every minute. I was sick of shopping and didn't think my body could take any more caffeine. I arrived home to an empty house and returned my phone calls, then two screaming kids ran though my living room and I heard doors slamming indicating the end to my peaceful day.

The loud things were wrangled outside into the pool and I joined them after a while, they play so well together now it was actually nice to sit there and watch the men take care of the kids. I did nothing.

I got a call from K's commercial agent telling me about a confidential project commercial audition tomorrow at 4:30. That made my head spin also going to have lunch with K at the mall while I went to Dr. Phil with D, now I had to drive into Hollywood too? I almost said no but hearing that this was a cool project I said yes and went into plan mode, this is what I came up:

I would pick up my friend D early and we would all get our nails done, I would then drive to the mall, drop them off and they could have lunch and walk around. I would drive to Dr. Phil and have my appointment with D. After that I would meet up with the girls, walk around a bit and take D home and then drive to Hollywood. Sounded easy enough for me, we'll see how this works out. If it's a bad traffic day I'll be writing the recap from prison.